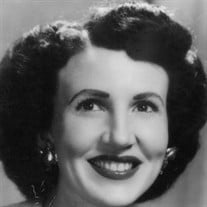 July 29, 1923 – March 28, 2021 Zula Long, 97, passed away peacefully at her home in Point Aquarius on Lake Conroe, Sunday, March 28, 2021. Zula was born July 29, 1923 in Star, Oklahoma to Butler and Annie Lee Lewis Hansard. She would always say, “A star was born”, and that she was! Her family moved to Stillwater, Oklahoma when she was a toddler because her brother, John, received a football scholarship to what was then known as Oklahoma A&M. She worked as an executive secretary and property manager until 1976 when she and Bob decided to leave the Houston rat-race. They moved to Montgomery County and became business owners, buying a marina, then later, owning antique shops. Zula never met a stranger. Recently, as Bob was pushing her wheelchair through a hospital waiting room, Zula saw a woman crying across the room. She asked Bob to push her over to the woman so she could give her a hug, “because she needs one”; and just about everyone in the line at the grocery store received a hug from Zula. Zula is survived by her beloved husband of over fifty years, Bob Long of Willis; daughters, Jamie Atwood of Willis and Carolyn Atwood of Tomball; nephew and apple-of-her-eye, Darryl Pratt and wife, Keena, and their daughters, Madison and McKenzie; nephew, Vernon Pratt; numerous nieces, nephews, and other relatives. In lieu of flowers, memorial donations may be made in Zula’s name to your local SPCA chapter. You are invited to leave a written condolence on our website at www.shmfh.com.

The family of Zula E. Long created this Life Tributes page to make it easy to share your memories.

Send flowers to the Long family.