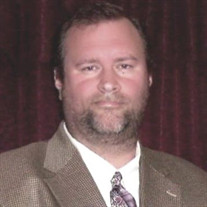 William Everett Muirhead was born in Pasadena, Texas on June 28, 1972 to Benjamin Franklin Muirhead and Sharon Rose Cook. As a young child, he lived in Pasadena, Splendora, Plum Grove and eventually his parents bought land in Cleveland where they built a home and William remained in the area for the remainder of his life with his wife, Amanda. William liked people of all walks of life. As a child, he loved family gatherings. He loved hanging out with his uncles, aunts, and cousins and he considered them to be some of the best days of his life. He was independent, responsible and accountable and like many, he was opinionated and stubborn with a heart bigger than Texas. He was a master electrician, a master plumber, he published a book, and a genealogy guru. William and his wife, Amanda, worked hand in hand on many construction projects, which included building their home. William was a Minister and he and Amanda always provided counsel and tools to those who wanted to know God. In 2003, Everett Muirhead Ministries worked with other organizations to transport more than 12,000 pounds of food to Madisonville, Texas to provide food for those in need. William was a man who helped others from the heart, without need for recognition. With Amanda by his side. William let his little light shine and gave his all to those he could. William is survived by his wife, Amanda Muirhead (nee Beckworth), his mother Sharon Rose Muirhead (nee Cook), step-daughter Lydia Louise Burton and her partner Whitney and their child, Lilith, his granddaughter Abigail Rose Bell, with former partner of Lydia Louise Burton; his brother, Leonard Franklin Muirhead and his children, Austin and Syrena; his brother Michael Dewayne Muirhead and his wife, April and their children, Colby and Emily; his sister Angela Kay Lloyd (nee Muirhead) and her sons, Andrew, Nathan and Clayton; his sister Barabara Jeanette Bradford (nee Muirhead) and her husband Johnathan and their children, Shilo, Dalton, Brayden, and many uncles, aunts, and cousins. William was preceded in death by his father, Benjamin Franklin Muirhead. You are invited to leave a written condolence on our website at www.shmfh.com.

William Everett Muirhead was born in Pasadena, Texas on June 28, 1972 to Benjamin Franklin Muirhead and Sharon Rose Cook. As a young child, he lived in Pasadena, Splendora, Plum Grove and eventually his parents bought land in Cleveland where... View Obituary & Service Information

The family of William Everett Muirhead created this Life Tributes page to make it easy to share your memories.

William Everett Muirhead was born in Pasadena, Texas on June...

Send flowers to the Muirhead family.