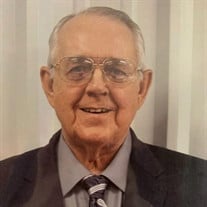 Arlen Wayne Allen was born October 28,1935 in Coleman, Tx. Eighty-five years later he was called home to be with the Lord on April 21, 2021. He was preceded in death by his parents O. G. Allen and Josephine Fine Allen, and his son John Anthony Allen. Early in life he became an entrepreneur and astute businessman, owning or investing in several small businesses. To further care for his family, he later gained employment at TDCJ and after 20 plus years retired at the rank of Sergeant. Wayne was a family man who fondly recalled his early days of bay fishing with his father, camping with his children, and his involvement in the Walker County Fair. Later, his life would revolve around his grandchildren and great grandchildren. He dearly loved having them gathered around his chair during Sunday lunch or special holidays. Wayne loved the Lord and was active in Bethel Baptist Church for many years until his health no longer allowed attendance in person. When he was unable to physically attend, he looked forward to watching the singing and services online and worshiping virtually. He was a proud Master Mason of well over 50 years and was a Charter Member of Albert J. DeLange Masonic Lodge # 1403 in Houston. He is survived by his wife of 35 years, Barbara Lunsford Allen; his brother Troy Allen and wife Ginger; his sister Carol Newton and husband Randy; sons, Vincent Allen and wife Melissa, and Kevin Lunsford and wife Renee; grandchildren, Cari McGown, Don M. Lunsford, Ryan Redden, and Chance Allen; and great grandchildren Kaydence, Koaltin, and Dakota. He is also survived by a host of other family members and friends. The funeral will be held at Sam Houston Memorial Funeral Home in Huntsville, Texas on Monday, April 26, 2021. Visitation will be from 9:00am to 10:00am and the funeral service will begin at 10:00am. Graveside services with Masonic honors will follow at East Sandy Cemetery on FM 1374, New Waverly, Texas. Memorial condolences may be made to the family at www.shmfh.com

Arlen Wayne Allen was born October 28,1935 in Coleman, Tx. Eighty-five years later he was called home to be with the Lord on April 21, 2021. He was preceded in death by his parents O. G. Allen and Josephine Fine Allen, and his son John Anthony... View Obituary & Service Information

The family of Wayne Allen created this Life Tributes page to make it easy to share your memories.