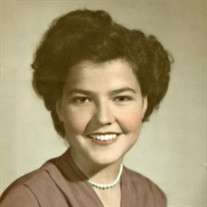 Velma Rae Avritt, 87, peacefully passed on to be with her Lord and Savior, while surrounded by family on July 1, 2021. She was born on October 31, 1933 in Huntsville, Texas to Herman and Eliza (Mrs. Katie) McCulloch. Rae was a devoted wife and mother to her husband Bobby Ray Avritt and four children Bobby Wayne Avritt, Tommy Ray Avritt, David Joe Avritt, and Joni Katherine Chastain. Rae met the love of her life, Bob, at the young age of 16 while attending church. After kissing him goodbye one afternoon in the front yard of her mother's house (an old broom factory), Bob proposed by simply asking: "you want to get married?" Rae and Bob were married in a double wedding with their best friends on September 2,1950 at an old farmer's house in Coldspring, Tx. The couples waited for the farmer to finish milking his cows, paid him $2, said their vows and were officially married. After two years of marriage, Rae and Bob began their life of adventure when Bob joined the United States Navy. They lived in many places including Long Beach, California; San Diego, California; Honolulu, Hawaii; Kingsville, Texas; and Charleston, South Carolina. Rae enjoyed living in Navy housing and easily made friends wherever she went. A lifelong caregiver, she kept all the neighborhood children and thrived in watching them grow. Once she and Bob laid their roots in South Carolina, Rae quickly established herself in the community. She became a Girl Scouts group leader, sewed costumes for the local cheerleading squad, coached softball, and became the sole softball scorekeeper each season. Rae also had a love for crafting and gardening. She handmade many items to decorate her home and sewed custom outfits for her children and grandchildren in addition to designing and sewing all of her own clothing. When she wasn't sewing or tending to her garden, Rae could be found dancing. She and Bob would often move all of their living room furniture to the side of the room and practice routines they learned while taking lessons at the Arthur Murray dance studio. Once her children were grown, Rae began working at JCPenney where she was employed for 10 years and ultimately became a Manager (though we all know she worked there for the shoe and jewelry discounts)! Rae loved to be with friends and family and always went out of her way to help others, she had a kind, compassionate heart and touched the lives of so many. She will be deeply missed by all. Rae was preceded in death by her parents, brother Marion Edward McCulloch, infant brother Joe Dean McCulloch, and son David Joe Avritt. She is survived by her husband Bob Avritt, her siblings Ruth Ashworth, Nelson McCulloch, Wilson McCulloch, Glynn Henley, Josie Saunders, her daughter Joni Chastain, her sons Tommy Avritt and Bobby Avritt, her grandchildren Kai Avritt, Monee Burke and husband Joe, Kaileigh Patrick and husband Seth, Adrianna Ingram, Tommy Lee Avritt, Johnathon Pierce, great-grandchildren Jase Burke, Josey Burke, Jeb Burke, Alexis Lent, Kendall Avritt, Kaden Avritt, Noah Washington, Kaleb Avritt, Kaylynn Pierce, great-great grandchild Willow Lent and countless other friends and family. Visitation will be held Wednesday, July 7, 2021 from 5:00-7:00pm at Sam Houston Funeral Home. Funeral services will be held Thursday, July 8, 2021 at 11:00am at Sam Houston Funeral Home. A graveside service will be held at McAdams Cemetery with a lunch to follow at McAdams Community Center. "I thank my God upon every remembrance of you" Phillipians 1:3

Velma Rae Avritt, 87, peacefully passed on to be with her Lord and Savior, while surrounded by family on July 1, 2021. She was born on October 31, 1933 in Huntsville, Texas to Herman and Eliza (Mrs. Katie) McCulloch. Rae was a devoted wife and... View Obituary & Service Information

The family of Velma Rae Avritt created this Life Tributes page to make it easy to share your memories.

Velma Rae Avritt, 87, peacefully passed on to be with her Lord...

Send flowers to the Avritt family.