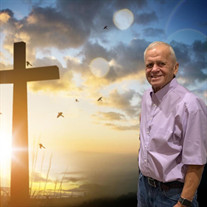 Thomas Michael Schwartz, age 73, passed on Christmas Day 2020. He was born on September 30th, 1947, in Omaha, Nebraska to parents Henry and Agnes Hana Schwartz. He was a Vietnam Navy Veteran serving on the USS Ranger. After exiting the Navy, he married the woman of his dreams, Ann Stratman Schwartz, in 1970. He additionally served two years in the US Army Reserves in the mid to late 1970s. Tom honorably served as a Police Officer for over 27 years with the Omaha Police Department. Upon retirement in 1997, he and Ann moved around every couple years: to Grove, Oklahoma; Corpus Christi, Texas; The Villages, Florida; and Hamilton, Georgia. He then finally settled in Montgomery, Texas in 2008 where he lived until he passed. Tom was a devoted and loving Husband, Father, Brother, Uncle, and Friend to All. In 2014, Tom and Ann took the trip of their dreams to Israel to “walk in Jesus’ footstep” - renewing their wedding vows in the Holy Land. This trip brought both of them closer to each other and strengthened their relationship with Christ. This last year, Tom often stated that he had achieved the greatest accomplishment of his life - being married to his soulmate Ann for 50 years, and then renewing their vows once again in front of loved ones. He loved spending his free time with Grandchildren and volunteering his time with his church family at St Mary’s Catholic Church in Plantersville, Texas. He is preceded in death by his little brother, Mark Schwartz; his sister-in-law, Francis Stratman White; and brothers-in-law, Raymond Patrick White and Ronald Paul Migis. He is survived by his loving wife of 50 years, Ann Stratman Schwartz; 2 daughters and their husbands, Eric & Mindy Weber and Matt & Missy King; 6 talented grandchildren, Thomas, Clara, Alex, Gabi, Crisi, and Jonah; 6 siblings, Rich, Kathy & Leonard, Lois & Denny, Joanie & Flo, Hank & Tec, and Jim; Brother/Sisters-in-Laws, Mary Jane, Jack, and Joanie; and numerous close nieces & nephews who he loved as his own. A Visitation will be at 11:00 AM on Wednesday, December 30th at St. Mary’s Catholic Church in Plantersville, Texas. A Memorial Mass will be held immediately following, beginning at 11:30 AM. A luncheon will be provided following the Mass. In lieu of flowers, the family requests donations be made in Tom’s name to St. Jude’s.

Thomas Michael Schwartz, age 73, passed on Christmas Day 2020. He was born on September 30th, 1947, in Omaha, Nebraska to parents Henry and Agnes Hana Schwartz. He was a Vietnam Navy Veteran serving on the USS Ranger. After exiting the Navy,... View Obituary & Service Information

The family of Thomas Michael Schwartz created this Life Tributes page to make it easy to share your memories.

Send flowers to the Schwartz family.