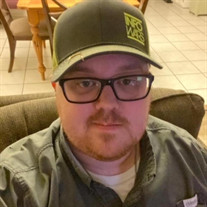 Thomas Matthias Pierce, Jr. was called to his eternal home on Tuesday, February 2nd, 2021 at the age of 31. Although he was only with us a short time, the memory of his gracious heart and gentle spirit will remain with us all forever. Thomas was born on March 16, 1989 in Conroe, Texas. A lifelong resident of Huntsville, Thomas graduated from Huntsville High School in 2007. He was a proud member of the Huntsville Hornets band and was an extremely talented trombonist. After high school he started a family and began a career with the Texas Department of Criminal Justice where he worked for over 10 years. He recently decided to pursue his dreams of owning his own business and was working hard toward fulfilling that dream by opening his own gunsmithing shop. Although at 6’6” he towered over most people, nothing was bigger than the size of Thomas’s heart. He was a very kindhearted person, and when you met him you would instantly be drawn to him and feel like you’ve been friends forever. He was always there for his family and friends and would go to the ends of the earth for them. Thomas had a brilliant and inquisitive mind and loved to learn and take on new hobbies, was a student of history and politics and had a strong love for music. The biggest love in Thomas’ life in which he dedicated all his heart and soul to were his two children, Noah and Avery. Thomas is survived by his Son Noah Pierce, Daughter Avery Grace Pierce, Father Thomas Pierce Sr, Mother Ruby Cowan and Husband Richard, Sister Tori Gattis and Husband Casey, Brother Troy Pierce, Grandmother Gay Wolverton, Aunt Christa Wood and Husband William, Aunt Laura Lea and Husband Kelly, Aunt Kathy Pierce, Uncle Andrew Wolverton and numerous nieces, nephews and cousins. Thomas is preceded in death by his Grandparents Kenneth and Margarete Pierce, Eldon Wolverton and Uncle Konrad Pierce. Funeral services will be at Sam Houston Memorial Funeral Home on Thursday, February 11th with visitation at 9:30 am and the service at 10:00 am. Memorial condolences to the family may be made to www.shmfh.com.

Thomas Matthias Pierce, Jr. was called to his eternal home on Tuesday, February 2nd, 2021 at the age of 31. Although he was only with us a short time, the memory of his gracious heart and gentle spirit will remain with us all forever. Thomas... View Obituary & Service Information

The family of Thomas Matthias Pierce Jr. created this Life Tributes page to make it easy to share your memories.

Thomas Matthias Pierce, Jr. was called to his eternal home on...

Send flowers to the Pierce family.