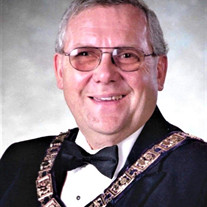 Terry Ellis Kerrick passed away peacefully on Monday, April 18, 2022, at age 72. Terry was born March 28, 1950 in Towanda, Pennsylvania to Charles Kenneth Kerrick, Sr. and Ava (Ellis) Kerrick of French Asylum, Pennsylvania. Terry was life-long resident of French Aslyum and Durell, Pennsylvania, until he retired from I.E. Dupont as part of the Maintenance Team. He then moved to Midland, Texas and then finally settled in Pointblank, Texas. He grew up on his family's farm, KenAva Farms, graduated from Towanda High School in 1968, attended Suny Dehi College, and raised his four children in French Asylum and Durell, Pennsylvania. He loved all things outdoors and was a member of the 4-H Club from kindergarten throughout his adult life. He was passionate hunter and a life-time member of the NRA. He was an expert at all things on the family named Kerrick and Ellis Hills and was well known for taking unsuspecting people to Barkley Mountain Cemetery where would scare them with tall tales and his driving antics. He loved all thing water, especially the Susquehanna and Trinity Rivers and all the streams and creeks throughout these areas. He spent much of his time sending canoes down the Susquehanna River with his TEEPEE and Kerrick Canoe businesses and was fondly nicknamed "Bobber" after an unfortunate incident with an airboat and Polly, which is well-remembered throughout Towanda. In his younger years, he enjoyed numerous snowmobiling escapades with friends and family. Terry loved music and was selected for First Chair Baritone at the Pennsylvania High School State Choirs in 1967 and 1968. He participated in numerous musical events and groups within the community including the Sayre County Choir, many minstrels, and was well remembered for his gorgeous singing voice in weddings, funerals, Christmas pageants, etc. throughout the area. He performed "God Bless the USA" on the Bradford County Courthouse steps during a town parade in 1991. After moving to Texas, he was a member of the West Texas State Barbershop Quartet. Terry loved softball and pitched on the Monroeton Men's softball league for many years. He coached recreational youth and all-star softball teams, and was an assistant coach for the Towanda Varsity Softball Team in the 1989-1990 season. He was an Exalted Ruler of the Huntsville, TX Elks Lodge, a Board Member of the Towanda Elks Lodge and was selected to attend a Texas State Elks Meeting. He was a lifetime member of the Towanda Gun Club, participating on the board in his earlier days. His strong sense of civic duty allowed him to be a part of all thing's community including being a volunteer firefighter for the Wysox Fire Department for many years. He could always be found mowing lawns for the elderly, providing food for Meals on Wheels, and assisting with putting out flags on Veterans' graves throughout the year. Terry and Polly were one of the first residents of Holiday Villages in Pointblank, Texas and were avidly involvement in growth of the community. His closest friends Richard and Ed formed "The Three Amigos" fondly called by their wives, and could always be found building something at someone's house. Terry met numerous friends that came and went from his famous "Coffee Club" at Jerry Restaurant in Onalaska, Texas. His fondest memories were spent with his friends Sandy, Kathy, Keith, Richard, Ed, et al, for "Toddies at 5" at Keith's where they discussed the community events and concerns. Terry was well known for always running into things with his truck, boats and even well-known for tipping over his Kawasaki Mule. Terry was well-known for his pyrotechnics during his amazing firework displays for his family, friends and the community and his summer chicken/clam bakes were notorious for a great time. Next to Terry's favorite pastime of spending time in his "Man Cave" and watching Penn State (Go State), he adored spending time with his twelve (12) grandchildren. He got great joy watching their faces and seeing their reactions to his fireworks displays, his elaborate Christmas decorations, hiding their candy at Easter, the rides on the lawnmowers, jet skis, pontoon boat, tubing, the infamous Mule or yelling across the yard at them to "get over here, what are you doing?" Terry was most known and will be remembered, in any community he lived in, for crazy sense of humor, his childish antics, repetitive "dad jokes", sunny disposition and amazing smile. He didn't care how he did it, he always wanted anyone around him to be happy. Terry is survived by his adored wife Paula Lee (McGavin) Kerrick of almost 50 years; his four loving children Clorece (Todd) Kulp of Doylestown, PA, Kaydance Hope of Fort Lauderdale, FL, Terrence (Robin) Kerrick of Pointblank, TX and Gabriell (Daniel) Debose of Ennis, Texas; 12 grandchildren Kaitlyn, Nala, Kyleigh, Alivia, Tristian, Liam, Dartanion, Kaleb, Titus, Jeremy, Austin and Daniel Jr; he is also survived by his sister-in-law Donna Kerrick, Pam Baker (Gary), and brother-in-laws Brian McGavin (Karen) and Robert McGavin (Trish), along with many nieces, nephews, and great-nieces and nephews. In addition to his parents, Terry is preceded in death by his brother Charles Kenneth Kerrick, Jr. and his grandson, Christopher Kerrick-Glassburn. Polly and her family will receive family and friends on from 3:00-5:00 PM CST on April 30, 2022, at the Huntsville ELKS lodge located at 3206 Elks Drive, Huntsville, Texas 77340. The family requests donations to the Elks Lodge in Huntsville, Texas in his memory. Memorial condolences to the family may be made at www.shmfh.com.

The family of Terry E Kerrick created this Life Tributes page to make it easy to share your memories.

Send flowers to the Kerrick family.