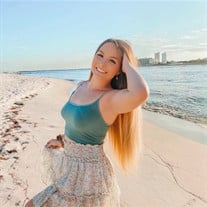 Tatum Bree Tiller, 19, of Conroe, TX passed away on August 29, 2021. She was born on March 31, 2002. Tatum graduated from Conroe High School in May 2020, with the dream of becoming a pediatrician. When in school she was very involved in Cheerleading, Volleyball, and Softball, so much that she would make it a point to help the younger kids at cheer camp to assist them in reaching their goals. Tatum was best known for her strong will, faith and the love she had for helping others. She had a smile that was contagious and could make any bad day bright. She loved her family very much. From beach trips with Mom, riding the seesaw with Olivia, hacking her brother Trace's Facebook account to let the world know how much he loved her, to unplugging and unwinding on The Frio with her Dad and Grana. Her passion, love, determination, and strong will are just a few things she will be forever remembered for. She is preceded in death by her great grandparents Leonard and Frances Winfield, grandmother Virginia (Ginger) Burling and survived by her Mother and Stepfather - Tami and John Redford; Father - Chad Tiller; Brother - Trace Tiller; Sister - Olivia Redford; Grandparents - Kenneth Burling, Carolyn Mims and David Weis, Billy and Carol Tiller, Ed Redford and Lisa Decker; Aunts - Janet Burling, Tanci Foster, Tara Oliphant, Cali Tiller-Wilson, Kinzi Johnson, Dana Young, Wendy Gourley, Kelly Redford, Kristy Redford; Uncles - Larry Winfield, Brad Young, Clint Tiller, Kevin Johnson, Mike Burling, Jason Oliphant, Matthew Foster, Kenny Rey; Cousins - James Dome, Elizabeth Powell, Bryan Foster, Cory Fay, Bailey Oliphant, Cody Fay, Hannah Foster, Chelsea Todd, Sydney Young, Cameron Gourley, Harrison Young, Jordyn Young, Kiptyn Wilson, Kash Wilson, Kendyl Johnson, Kinlee Johnson, Parker Redford, Cash Redford, and many, many dear friends.

Tatum Bree Tiller, 19, of Conroe, TX passed away on August 29, 2021. She was born on March 31, 2002. Tatum graduated from Conroe High School in May 2020, with the dream of becoming a pediatrician. When in school she was very involved in Cheerleading,... View Obituary & Service Information

The family of Tatum Bree Tiller created this Life Tributes page to make it easy to share your memories.

Send flowers to the Tiller family.