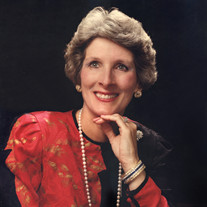 Sunny Ernst entered eternal life on Monday, the 15th of November 2021, and rests in the arms of God. Born in Galveston, Texas on the 29th of May 1942, the daughter of Nina Derry Murphey Wilkens and Richard Barlow Wilkens, Jr. She attended Lamar High School in Houston and The University of Texas at Austin where she was a member of Zeta Tau Alpha sorority. She made many lifelong Zeta friends and met her husband Robert "Bob" Clinton Ernst while attending college. They married in 1963, and a year later moved to Huntsville, Texas to raise a family and work in Bob's family retail businesses. For four decades they owned and managed Ernst Jewelers and Mt. Vernon Gift Shop, two of the oldest stores on the Downtown Square. A vivacious philanthropist, Sunny donated her time and heart to many charitable causes. She held numerous advisor positions for Zeta Tau Alpha sorority. Bob and Sunny founded and hosted in their Lake Travis home an annual outing for teenagers with cancer in conjunction with The Sunshine Kids. The Teen Lake Escape has continued for 29 years. More recently, Sunny was an avid volunteer at ROCK, a provider of equine-assisted therapy where she enjoyed being a handler alongside her horse Scooter, serving on its Board of Directors, and President of the Horseshoe Club. Those who knew Sunny well would say that her name was perfect as she was gracious, giving and kind to everyone she encountered in life. Her family was her world, and she was affectionately known as "Gram". Her selfless spirit and bright light will live on far beyond her years on earth. Sunny is survived by her loving husband Bob of 58 years and their children, Cathryn Ernst Ramirez and husband David, and their children, Ashley and Ryan of San Diego, CA; Robert Clinton Ernst Jr. and wife Blythe and their children, Taylor, Cade and Issa of Huntsville; and Richard Lange Ernst and wife Kristin and their children, Elizabeth and Wilson of Austin; sister-in-law Sandy Pratt Wilkens, niece Derry Wilkens, and nephew Richard Wilkens IV and his family. Sunny was preceded in death by her parents, stepmother Louise Stengel Wilkens, and brother Richard Barlow Wilkens III. Family and friends are invited to Sunny's Life Celebration at 2:00 pm, on Monday, November 22, 2021, at the First United Methodist Church, 1016 Sam Houston Avenue, Huntsville, Texas with reception to follow. In lieu of flowers, please consider a gift in her honor to ROCK-Ride on Center for Kids, P. O. Box 2422, Georgetown, TX 78627 or www.rockride.org. Memorial condolences may be made to the family at www.shmfh.com. You may view Sunny's memorial tribute at the following link: https://www.tributeslides.com/tributes/show/4LCKZ23MCX4ZHYQC

Sunny Ernst entered eternal life on Monday, the 15th of November 2021, and rests in the arms of God. Born in Galveston, Texas on the 29th of May 1942, the daughter of Nina Derry Murphey Wilkens and Richard Barlow Wilkens, Jr. She attended... View Obituary & Service Information

The family of Sunny Wilkens Ernst created this Life Tributes page to make it easy to share your memories.