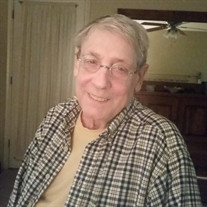 Stephen Bradley Willeford was born on May 23, 1950 in Minneapolis Minnesota. He grew up there until the age of 15, when his Dad decided he had had just about enough of the Minnesota winters. Steve was only too happy to oblige. They moved to Houston in the mid-1960s, to an area in the middle of nowhere that would soon welcome the Astrodome. Steve spent his youth working on cars, working at the Rettig's ice cream shop, A&W Root Beer stand and just generally getting into mischief. He married his 1st wife, Pam, at a young age, had 2 children and joined the Navy. After several years in various Florida towns, Steve eventually wound up back in Houston. Steve developed his skills at craftsmanship and became a master picture framer, working in galleries then running his own business. After moving to Dallas, he developed an interest in computers, became certified and worked in IT support. He retired in 2003, Steve loved dogs, westerns, cars and vegetable gardening - pretty much in that order. Given the choice, he would rather love on any old hound off the street than give most humans the time of day. Steve knew that with animals, their love was unconditional. and without judgement. He could tell you the make and model of every car in an old movie without blinking an eye. Steve is preceded in death by his mother, Evelyn Black Willeford, father Hollis B. Willeford, Sr., and brother Gregory Mark Willeford. Steve is survived by his wife, Susan Ippolito Willeford, daughter Amy Lynn Willeford Houck, son Dustin B. Willeford (and wife Alinn), sister Diane Willeford Flatz (and husband Doug) and brother Hollis B. Willeford, Jr.(and wife Barb). Seven grandchildren - Hunter Houck, Madison Houck, Alayna Scott, Mikayla Willeford, Jaeden Lugo, Dylan Willeford and Austin Willeford. He also leaves nieces Judith Morris (and husband Bill), Sheila Flatz, and Christine Coykendall (and husband Jeff). In lieu of flowers, please make donations to the animal shelter of your choice.

Stephen Bradley Willeford was born on May 23, 1950 in Minneapolis Minnesota. He grew up there until the age of 15, when his Dad decided he had had just about enough of the Minnesota winters. Steve was only too happy to oblige. They moved... View Obituary & Service Information

The family of Stephen Bradley Willeford created this Life Tributes page to make it easy to share your memories.

Stephen Bradley Willeford was born on May 23, 1950 in Minneapolis...

Send flowers to the Willeford family.