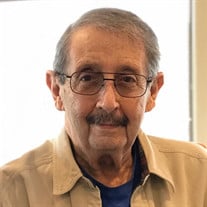 Sidney Lawrence Ravkind of Montgomery, Texas left this life on Saturday, January 22, 2022 surrounded by family to be with his beloved, (departed) wife of 43 years, Margie Marie Ravkind. Sidney, known affectionately to everyone as "Sid", was born in Dallas, Texas on October 17, 1936. He received his BS degree from the University of Texas at Austin and thereafter attended The University of Texas School of Law in Austin where he served as a Student Editor for the Texas Law Review until graduating in 1960 with the highest of honors. He was a Law Clerk for former Chief Justice of the Texas Supreme Court, Robert Calvert from 1960-1961 and moved on as the law clerk for Simon Sobeloff, Chief Justice United States Court of Appeals for the Fourth Circuit, from 1961-1962. In 1962, joined the law firm of Mandell & Wright, where he ultimately became Managing Partner in 1976. In 1994, he left to form The Ravkind Firm, which he ran for many years before retiring. He was an active member of the State Bar of Texas for over 60 years and licensed to practice in the U.S. Supreme Court, the 4th, 5th, & 11th Courts of Appeals, and the Northern, Southern, Western and Eastern District Courts in Texas. He was a man of Jewish Faith with a firm belief in God, justice and compassion. A skilled golfer, playing for many years and as often as time would allow. Most would find him hard to forget as his wit and comedy always made an indelible impression. Laughing was an everyday occurrence, either by shock or amazement, when in his presence. A kind, generous and wonderful caregiver to those he loved. Phrases he would repeat throughout his life, “Can I get you anything?”, “Can I do anything for you?” even if he himself were not well. He was immensely loved and admired and will be missed beyond measure. He was pre-deceased by wife Margie Ravkind, parents Abe and Edna Ravkind and brother Billy Ravkind. He is survived by his sister Joan Susman and 5 children, Ronald Ravkind of Houston, TX, Lauren Ravkind-Weiss of Austin, TX, and Dawn Ravkind, Michelle Ravkind, and Marsi Ravkind of Montgomery, TX. He also had 11 grandchildren. His memorial will be held on February 19, 2022 in Galveston, TX. Only immediate family members will attend. Condolences can be sent to 3810 Mystic Circle, Montgomery, Tx 77356

Sidney Lawrence Ravkind of Montgomery, Texas left this life on Saturday, January 22, 2022 surrounded by family to be with his beloved, (departed) wife of 43 years, Margie Marie Ravkind. Sidney, known affectionately to everyone as "Sid", was... View Obituary & Service Information

The family of Sidney Lawrence Ravkind created this Life Tributes page to make it easy to share your memories.

Sidney Lawrence Ravkind of Montgomery, Texas left this life on...

Send flowers to the Ravkind family.