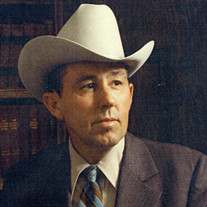 William Darrell White went home to be with Jesus on December 10, 2020 after being here on earth for 94 years. Darrell was born in Huntsville, Texas to George and Dovie White. As a young man, Darrell served in the U. S. Army during WWII. He saw active duty and served under General Patton. After being honorably discharged, he moved to Houston, Texas where he rented a room and met the love of his life, Janell Koehl. They were married in 1950 and remained married for 70 years. After asking Darrell what the secret was to a long and happy married life, his answer was to never go to bed mad at each other. Each and every night, Darrell and Nell held hands and expressed their love for each other. Darrell was a long time law enforcement officer with his first position being a Security Officer at Sam Houston State Teachers College in 1957. In 1959, Darrell became a City of Huntsville Police Officer, a Deputy Sheriff in 1965 and ultimately became the Sheriff of Walker County in 1969 where he remained in that position for 20 consecutive years. The retirement years were good to Darrell as he enjoyed his time on the ranch. He was proud of his horse training abilities and his vast knowledge of agriculture. Darrell loved animals and in general enjoyed being outdoors whether it be hunting, fishing or just going to check on his cows. On his last day here on earth, he was joking, laughing and driving his four wheeler across the property making sure everything was in order. For those of you who knew him, you are certainly familiar with his good natured attitude, his big smile, constant laughing and his many pranks that he loved playing on people. He dearly loved to visit and tell story after story while drinking his Dr. Pepper. He would talk until he lost his voice. Each day was an adventure for him and many say he was still a kid at heart. Above all, he cherished his time with his wife of 70 years, his family and his many friends. He will forever be missed. Darrell was preceded in death by his parents, George White and Dovie Ellington White, his five sisters, one brother and his great grandson, Maddox William White. William Darrell White is survived by his wife, Janell White, children Dennis White and wife, Tayna, Ronnie White and wife, Reba, and Ruth Lynch and husband Tommy. He is also survived by his grandchildren, Rex White, Angela DeLeon Guerrero, Johanna White and Keith Bond. He is survived by one great grandson, Theodore DeLeon Guerrero. Memorial Service will be held on Tuesday, December 15, 2020, 10am at the Sam Houston Memorial Funeral Home in Huntsville, Texas. Graveside will immediately follow at Ebenezer Cemetery. Sherriff White will lie in state at Sam Houston Memorial Funeral Home, Monday, December 14, 2020 from 10am to 7pm. Those wishing to leave memorial condolences for the family may do so at www.shmfh.com.

William Darrell White went home to be with Jesus on December 10, 2020 after being here on earth for 94 years. Darrell was born in Huntsville, Texas to George and Dovie White. As a young man, Darrell served in the U. S. Army during WWII. He... View Obituary & Service Information

The family of Sheriff Darrell White created this Life Tributes page to make it easy to share your memories.

William Darrell White went home to be with Jesus on December...

Send flowers to the White family.