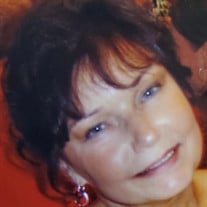 Graveside services for Sharon Durbin are scheduled for Monday, December 28, 2020 at 2:00 pm, in Mayes Addition of Oakwood Cemetery, Huntsville, Texas with the Reverend Reagan Cooksey officiating. Family is requesting the use of masks by those in attendance. Sharon Kaye Heartfield Durbin was born in Huntsville, Texas to Blanche Wyser and G. A. Heartfield, Sr. She was the youngest of their four children and enjoyed an idyllic childhood in the family home on Avenue N and later the Heartfield Farm on HWY 30. She and her family were longtime members of First Christian Church. In her senior year of high school, Sharon was named a Duchess in the Neches River Festival in Beaumont, Texas. She graduated from Huntsville High School in 1966, having been named a Class Beauty and HHS Twirler her junior and senior years. Throughout high school Sharon worked at her mother’s business, Heartfield Florist. While she was in school she met and began dating her future husband, Denny Durbin. Sharon attended Sam Houston State University and was a member of Kappa Delta Sorority. In 1968 she married Denny and after several moves settled in Panama City, Florida. Sharon began her working career as Assistant to the President of the Angleton Bank of Commerce, Angleton, TX. and continued in banking with a move to Huntsville National Bank, Huntsville, TX. In Florida Sharon accomplished a personal goal and graduated from Gulf Coast State College with honors in Accounting. Sharon had a tender spot in her heart for dogs. There was not one she could not love and bring into her home. She was also an accomplished gardener and especially known for her African Violets and orchids. She was an excellent cook and loved to make family members laugh out loud. Sharon had a natural talent in fashion design and was known to find the best bargains when shopping. She will truly be missed by many. Sharon is preceded in death by her parents, her brother, G. A. (Jerry) Heartfield, Jr., her sister, Patricia Heartfield Pierce, and her in-laws, Johnny and Eldena Durbin. She is survived by her husband of 52 years, Denny, her brother, Bob (Anne), her brother-in-law, Chuck (Jane) Durbin, and numerous nieces and nephews who all lovingly called her “Aunt Kaye.” She is also survived by her beloved dog, Baby. For those wishing to remember Sharon with a memorial, the family suggests it be made to an animal shelter or the charity of your choice. Memorial condolences to the family may be made at www.shmfh.com.

Graveside services for Sharon Durbin are scheduled for Monday, December 28, 2020 at 2:00 pm, in Mayes Addition of Oakwood Cemetery, Huntsville, Texas with the Reverend Reagan Cooksey officiating. Family is requesting the use of masks by those... View Obituary & Service Information

The family of Sharon Kaye Durbin created this Life Tributes page to make it easy to share your memories.

Graveside services for Sharon Durbin are scheduled for Monday,...

Send flowers to the Durbin family.