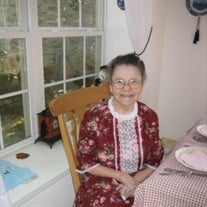 Ruth LeVerne Dalrymple (Brost), 101, of Conroe, Texas was called to her heavenly home on Tuesday, 23 February 2021. Ruth was born on January 8, 1920 in Alliance, Nebraska. She married Robert (Bob) Dalrymple on June 5, 1945. They made their home in Provo, Utah and Scottsbluff, Nebraska, before making their final move to Texas. She shared her life with Bob for 61 years, with multiple moves throughout their life together. She made her choice to serve the Lord when she was 12 years old and always loved His way and people. She adored her family and often stewed over them privately. She was preceded in death by her parents, Edward and Bertha Brost, her husband Robert Dalrymple, her sisters Bernice Townsend, and Anne DeWitt, her son Edward Dalrymple, and her two infant daughters Lois and Eunice Dalrymple. She is survived by her daughter-in-law, Connie Dalrymple, of Anderson Island, WA, her grandchildren; Nathan (Carrie) Dalrymple, of Dayton, OH, Jonathan (Andrea) Dalrymple, of New Orleans, LA, Angela (Steven) Opel, of Conroe, TX, and Lorianne (Hayden) Burrows, of Chirstchurch, New Zealand; great grandchildren, Emma and Ethan Dalrymple, Elsa and Stella Dalrymple, David and Marion Opel, Lochlan and Devon Burrows. A funeral service will be held on Wednesday, 3 March 2021 at Sam Houston Memorial Funeral Home in Willis, Texas at 10am with burial immediately following at Smith Memorial Park. You are invited to leave a written condolence on our website at www.shmfh.com. To view the recorded funeral service, please click the following: https://client.tribucast.com/tcid/60668915

Ruth LeVerne Dalrymple (Brost), 101, of Conroe, Texas was called to her heavenly home on Tuesday, 23 February 2021. Ruth was born on January 8, 1920 in Alliance, Nebraska. She married Robert (Bob) Dalrymple on June 5, 1945. They made their... View Obituary & Service Information

The family of Ruth Dalrymple created this Life Tributes page to make it easy to share your memories.

Send flowers to the Dalrymple family.