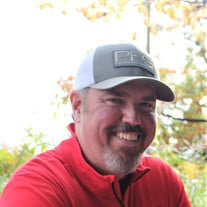 Ronald L. Whitlock, II passed away in Dallas on March 18 after an intense year-long battle with blood cancer. Born on March 27, 1975, to Marilyn and Ronald I, Ronnie grew up as his dad's right-hand man and top assistant. He learned about woodworking and all sorts of other handy skills from his dad, whom he greatly enjoyed spending time with. After graduating from Huntsville High School, he married Angela Rigamonti and they had three beautiful daughters: Megan, Sarah and Taylor. Ronnie obtained a bachelor's and then master's degree from Sam Houston State University before embarking on a career in computer network engineering. He obtained the top networking accreditation available, the CCIE, and was employed by Cisco Systems at the time of his death. He enjoyed woodworking and handyman projects, flying his Cessna 172 Skyhawk, playing the drums and exploring different cities and places to eat. But most of all, Ronnie loved being a dad. He was so proud of his three girls and spent as much time with them as he could. Ronnie met his wife, Jennifer in 2019 and they were married in 2021. They enjoyed traveling the U.S. before the pandemic, then spent lots of happy evenings on their porch or driving around in the UTV enjoying the Central Texas countryside where they made their home. While he was battling cancer and throughout his frequent hospitalizations during the past year, Ronnie impressed his physicians and nurses with his charm and good-natured attitude, even during challenging circumstances. He never quit fighting, not even to the last minute. In addition to his wife and daughters, he is also survived by his mother and sisters Mandy Nelson and Lisa Darsey. Ronnie was preceded in death by his father. A visitation is set for Tuesday, March 22 from 6-8 p.m. and services will be at 1 p.m. Wednesday, March 23 at Sam Houston Memorial Funeral Home in Huntsville. In lieu of flowers, memorial contributions may be made to the International Myeloma Foundation https://www.myeloma.org/donate or the UT Southwestern Medical Center https://engage.utsouthwestern.edu/donate-now. Memorial condolences may be made to the family at www.shmfh.com.

Ronald L. Whitlock, II passed away in Dallas on March 18 after an intense year-long battle with blood cancer. Born on March 27, 1975, to Marilyn and Ronald I, Ronnie grew up as his dad's right-hand man and top assistant. He learned about woodworking... View Obituary & Service Information

The family of Ronald Leroy Whitlock, II created this Life Tributes page to make it easy to share your memories.

Ronald L. Whitlock, II passed away in Dallas on March 18 after...