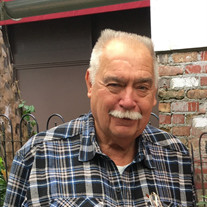 Ronald Althen Niederhofer of Baytown passed away peacefully on February 19, 2022 surrounded by his family. He was preceded in death by his parents, Althen and Janet Niederhofer. Survivors left to cherish his memory include his life partner of 40 years Carolian Moore; sister Karon Murff and husband James of Huntsville, TX; daughter Sharese Hurst and husband Lane of Bedias, TX; daughter Amanda Cavazos and husband Mark of League City, TX; son Blake Niederhofer and wife Heather of Montgomery, TX; grandson Braeden Whitecotton of Vero Beach, FL; grandson Keegan Hurst and granddaughter Annsley Hurst of Bedias; grandsons Dylan Dresen and Christian Cavazos of League City; granddaughter Samantha Bolla of Montgomery; granddaughter Whitney Cragg and husband Josh of Baytown; grandson Jonathon Bolick and wife Breanna Bolick of Baytown; great-grandchildren Brantley and River Bolick; along with many other family and friends. Ron was born August 22, 1943 in Huntsville, TX and graduated from Huntsville High School, Class of 1962. He is an alumnus of Sam Houston State University, Class of 1969. Ron served in the Army National Guard of Texas and the United States Army until he was honorably discharged in 1968. Ron moved to Baytown in the early eighties where he owned and operated Niederhofer Chemical and Vegetation Control, later renamed Niederhofer Enterprises, Inc., until his retirement. He was dedicated to his career and had impeccable work ethic. Ron made many lifelong friends, while working as a contractor with Exxon for over 40 years. Ron had a heart of gold and would lend a helping hand to anyone in need, without a second thought. He loved to get together with family and friends, especially if it involved eating shrimp and fish. Ron enjoyed bay fishing, as well as relaxing at home while listening to Willie Nelson and friends. Visitation will be held on Monday, February 28, 2022 from 12:00pm to 2:00pm at Sam Houston Funeral Home Chapel in Huntsville, with services beginning at 2:00pm. Interment will follow with a graveside service at Blackjack Cemetery in Huntsville. A memorial service will be held in Baytown, TX at a date to be determined. In lieu of flowers, memorial donations may be made to the Blackjack Cemetery Association, c/o Virginia Cooper, PO Box 918, Huntsville, TX 77342, or Rita B. Huff Animal Adoption Center, 530 Bearkat Blvd., Huntsville, TX 77340. Memorial condolences to the family may be made at www.shmfh.com.

Ronald Althen Niederhofer of Baytown passed away peacefully on February 19, 2022 surrounded by his family. He was preceded in death by his parents, Althen and Janet Niederhofer. Survivors left to cherish his memory include his life partner... View Obituary & Service Information

The family of Ronald Niederhofer created this Life Tributes page to make it easy to share your memories.

Send flowers to the Niederhofer family.