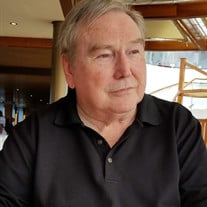 Roger Dell Riley was born on January 30, 1945 in Dallas, Texas to Charlie Norrette and Ora Corine Riley. Roger passed away on September 23, 2021 in Huntsville, Texas. After school, he served in the United States Marine Corps and spent two tours in Vietnam. He went to work for Stewart & Stevenson on September 10, 1977 and that is where he met the love of his life. His future bride, Connie had been employed there four years. She had a friend that worked in the same department as Roger and was getting him to get all the scoop on Roger he could and report back to her. Connie invited him to the company Christmas party that year and the rest is history. After a two-month whirlwind romance, Roger and Connie were married on December 22, 1977. Most of their friends thought they were crazy but this December would mark 44 wonderful years together. Along the way, Roger loved to fly and got his Private Pilot license in 1981. He retired after a long career at Stewart & Stevenson on January 30, 2016, which was his 70th birthday. Roger is preceded in death by his parents, Charlie and Ora Riley and grandson Roger Hartgrave. He is survived by his loving wife Connie, son Kenneth Dell Riley and daughter Corine Riley Kane. He is also survived by his stepchildren John Dill, Tracy Morris and Cynthia Dill. Seven grandchildren; Dustin Hartgrave, Lauren Perkins, Lexi Cadwallader, Austin Dill, Addison Dill, Cassandra Morris and William "Trey" Morris. As well as two great grandchildren; Scarlett Hines and Dustin Hartgrave, Jr. Visitation will be held at 9:00 am on October 1, 2021 at Sam Houston Memorial Funeral Home in Huntsville, TX, with a service immediately following at 10:00 am. Burial will take place at 3:00 pm at Hillcrest Garden of Memory in Hillsboro, TX. Memorial condolences may be made to the family at www.shmfh.com.

Roger Dell Riley was born on January 30, 1945 in Dallas, Texas to Charlie Norrette and Ora Corine Riley. Roger passed away on September 23, 2021 in Huntsville, Texas. After school, he served in the United States Marine Corps and spent two tours... View Obituary & Service Information

The family of Roger Dell Riley created this Life Tributes page to make it easy to share your memories.

Send flowers to the Riley family.