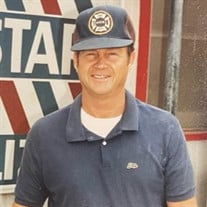 The Family, and Friends of Robert "Rabbit" Warren sadly report his peaceful passing on March 12th at 5:44am at Crestview in Bryan, Texas. He was born on November 4th, 1935 to Charlie Trailer Warren and Beulah Mae Davis Warren. His mother sadly passed away when he was but 9 months old. His father married Sadie shortly thereafter, and together they raised him along with his 6 brothers and sisters. He is going to be lovingly missed by his daughter Jenny Lynn Ready and her husband Gary Ready. His daughter Sandy Gutierrez and husband Gus Gutierrez. His granddaughter Haley Magee and her husband Jason Magee, Lacey Garcia and husband James Garcia, Jacob Ready and his wife Ashley and Keley Barrientos and husband Joe Barrientos. Great grandchildren Allen Magee, Jason Ready, Hattie Gutierrez, Auggie Garcia, Avery Barrientos, Wyatt Ready, Mager Garcia, Nellie Garcia and Sadie Barrientos. His sisters Essie Pearson, Sadie Marie Oats and Merlene Phillips and her husband James Phillips. He is preceded in death by his whole heart and wife of 53 years, Nelda Warren. His father Charlie Trailer Warren. His mother Beulah Mae Davis Warren. Step Mother Sadie Warren. Brothers Charles and Henry Warren and sister Gynell Miller, and BIL's Bill Miller, Joe Pearson, Paul Oates, SIL, Betty Warren, and Great-Grandson William Henry Ready. There is also a multitude of Friends and Relatives not listed, but no less treasured in his sweet heart. He was a people loving man, and if he loved you...you knew it! He grew up fishing and hunting and worked hard to help raise a garden to feed his Family during mostly hard times. He loved to draw and was quite accomplished in mathematics. In fact, he could do most equations in his head. He often bragged about graduating with a B+ average, and never cracking open a book. In high school he played football and ran track, where he received his nickname Rabbit, because it was said, he could run like a rabbit. He won State in the 100 yd. dash his senior year. He was All State in Football, and loved the game his entire life. He met his wife Nelda soon after graduating high school and they soon married. She was his world. He would go to the ends of the Earth for her. After years of working for Brown and Root, as a welder, they moved home to Riverside, Texas, to raise their two daughters. He bought a store, added onto it with his Uncle Jesse, and that became THE store of all the town for many, many years. He spent his off time on the river or in his deer stand, catching and hunting enough game to share with his beloved Community. He taught Sunday School and served as Deacon, first in Riverside Baptist Church, and later at Northside Baptist Church. He raised his two daughters and their children to love and live by God's Commandments. His presence here on earth will be missed greatly. The visitation for Robert Warren will be held on Monday, March 21st at 10:00 am at Northside Baptist Church in Huntsville, Texas and his service will directly follow at 10:30 am. Graveside will immediately follow at Brooke Cemetery. Serving as pallbearers are Mike Mangham, Bubba Smith, James Card, Joe Barrientos, James Garcia, Jason Magee, Jacob Ready and Gary McGilberry. Honorary pallbearers are Chase Parker and Fritz Weinzel. Memorial condolences may be made to the family at www.shmfh.com.

The Family, and Friends of Robert "Rabbit" Warren sadly report his peaceful passing on March 12th at 5:44am at Crestview in Bryan, Texas. He was born on November 4th, 1935 to Charlie Trailer Warren and Beulah Mae Davis Warren. His mother sadly... View Obituary & Service Information

The family of Robert "Rabbit" Warren created this Life Tributes page to make it easy to share your memories.

The Family, and Friends of Robert &quot;Rabbit&quot; Warren sadly report...

Send flowers to the Warren family.