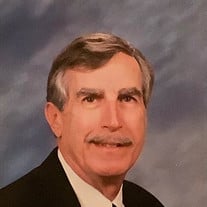 Robert (Bob) Warner passed into Life on Thursday, Oct 21, 2021. He was 88 years old. Bob was born in New Haven, CT, on June 20, 1933, to Robert and Elizabeth Warner. After graduation from high school, the Army claimed his service, sending him to Germany from 1954-56. While there, he served as radio operator since his C.O. liked Bob's voice. After his service, he returned home to Birmingham, AL, where he met his future wife, Loretta Reed. They married in 1957. Bob went into sales, first working for Kay Jewelers, then for Nikon cameras where he rose to "Millionaire Club" status as one of their top salesmen. His tenure with Nikon took them to Slidell, LA, Friendswood, TX, and finally to Saint Thomas, VI. After retirement, the couple settled in Huntsville, TX. They were active members at University Heights Baptist Church, where Bob taught Sunday school for many years. Bob was an adventurous soul, as several motorcycles and two sailboats can attest. His love of travel, via whatever vehicle, meant that he and Loretta were never bored with life. His family knew him as a congenial, generous man. But the greatest joy of Bob's life was the Scriptures, which he read from cover to cover, every year. Bob is survived by two daughters, Billie Kinnaird and husband Stephen; and Vicki Burdsall and husband Ned; one sister, Carol Fahner and husband John; and two grandchildren, Robert Burdsall and wife Chrissy, and Lauren Burdsall Maudlin and husband Nick; great grandchildren Parker and Bennett Maudlin; Warner, Dean and Heath Burdsall. The family would like to thank Cheryl Pryor for her friendship and care for our Dad over his last few years. Services will be held Wednesday, Oct. 27, 2021, at 11:00 a.m. at Sam Houston Memorial Funeral Home, with interment following at Brooke Cemetery.

Robert (Bob) Warner passed into Life on Thursday, Oct 21, 2021. He was 88 years old. Bob was born in New Haven, CT, on June 20, 1933, to Robert and Elizabeth Warner. After graduation from high school, the Army claimed his service, sending... View Obituary & Service Information

The family of Robert Dwight Warner created this Life Tributes page to make it easy to share your memories.

Send flowers to the Warner family.