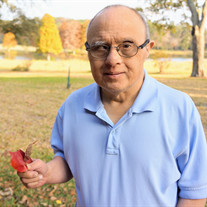 Robert "Tito" Hernandez, of Huntsville, Texas, transitioned to his life everlasting after a life well lived on December 5, 2021. Tito was born February 6, 1953 in Huntsville, Texas to his father, Juan R. Hernandez and mother, Librada Juarez Hernandez, both of whom received him in Heaven along with his brother, Francisco Hernandez. Tito was a focused, hard worker, and he took a tremendous amount of pride in everything he did. Tito showed everyone the extent of his determination when he ran with all his might in the Texas Special Olympics. Tito was his family's champion! After his running days were behind him, he focused his energy on working. For a number of years, he worked at Manuel's Mexican Restaurant in Brenham, where Tito built a reputation for being a dependable and diligent worker that both the staff and guests looked forward to seeing. When he was not working, Tito loved to have a good time and dance, and he was an amazing dancer. Forget the bachata, cumbia or salsa, Tito's sisters, nieces and girlfriends quickly learned that his moves on the dance floor made for a far better time. To relax, Tito would spend countless hours in front of the t.v. watching wrestling matches, where he was thoroughly engrossed in each dramatic move. On Sunday, the WWE and Lucha Libre lost their biggest and most loyal fan. Tito's legacy lives on through his surviving brothers and sisters, Elizabeth Hernandez Garcia, Lidia Hernandez Shadle, Benjamin Hernandez, Ruben Hernandez and Betty Hernandez, and Consuelo Hernandez Roussett and Ray Roussett. Each of them played with him, cheered for him, cared for him and loved him well throughout his years. Tito is preceded in death by his mother, father, brother, his in-laws: Bobby Alexander "Chico" Garcia, Robert Leon Shadle, Maria DeJesus Arciniaga Hernandez, and his nephew, Bobby Layne Garcia. Memories of Tito's humor, his hugs and his warm smile will be cherished by numerous nieces and nephews, who each learned valuable life lessons on compassion, persistence and unconditional love from their beloved Uncle Tito. For those nieces and nephews that are too young to remember their Uncle Tito, they will grow up hearing stories of an amazing man who rivaled legends. They will hear of a man who showed the world that being different is beautiful, and that ability is merely a matter of perspective. The Hernandez family would like to extend our love and appreciation to Tito's caregivers, who lovingly served as the hands and feet of Jesus through each phase of his life's journey. In lieu of flowers, donations can be made in Tito's name to Shriner's Hospital for Children (Houston) and the Special Olympics Texas. Tito's funeral will be held on Thursday, December 9th at 10:30am - Sam Houston Memorial Funeral Home - 1700 Normal Park Drive, Huntsville, Tx 77340. Memorial condolences may be made to the family at www.shmfh.com.

The family of Roberto "Tito" Hernandez created this Life Tributes page to make it easy to share your memories.

Send flowers to the Hernandez family.