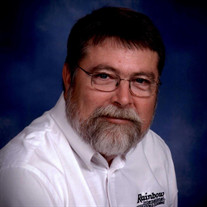 Butch Evans, 65, died November 14, 2020, at his home in Huntsville, Texas. Butch was born December 11, 1954, in Laredo, TX, to Jo Fern and Jim Evans. While Butch grew up in Waco, TX, he raised his family and built his business in Huntsville, TX. Along with his wife Emily, they moved to Huntsville to start a carpet cleaning business called Rainbow International. Starting from scratch, they built the largest carpet cleaning and water restoration business in Walker County. Beyond Butch being an expert in water restoration, he was mostly known for his character and honesty. Butch built his business on the trust he established over decades with his customers. He is survived by his wife of 45 years, Emily and three daughters, along with three “late in life sons”, Katy and Brian Harig, Megan and Raymond Lucier, and Jessie and Billy Hoffmann. Butch had four grandchildren; Logan, Hank, Ana, and Ivy. Butch is also survived by his brother Gary Evans and wife, Francis, of Kansas City, Mo., sister, Tanna Highfill of Waco, TX, many nieces and nephews, and his beloved dog, Jack. Butch and Emily live on Sunset Lake in what they call “the compound”, surrounded by his in-laws Laura, Tom, Sally and Ivo along with his father-in-law, Gramps (Ivo Sr.). Butch was active in his church, First Presbyterian Church in Huntsville, TX. He was an elder where he served in leadership roles for over 20 years. As a dedicated father and grandfather, Butch was respected and adored by his family. He was a handyman around the house, constantly fulfilling Emily’s dreams and making their house into the warm home it is today. He loved to fish in Sunset Lake where his children and grandchildren spent summers swimming and playing. But most of all, Butch was a dedicated and loyal husband who loved his wife, Emily. In lieu of flowers, donations can be made to the Butch Evans Memorial Fund at First Presbyterian Church, Huntsville, Texas. Memorial condolences to the family may be made to www.shmfh.com.

Butch Evans, 65, died November 14, 2020, at his home in Huntsville, Texas. Butch was born December 11, 1954, in Laredo, TX, to Jo Fern and Jim Evans. While Butch grew up in Waco, TX, he raised his family and built his business in Huntsville,... View Obituary & Service Information

The family of Robert "Butch" Evans created this Life Tributes page to make it easy to share your memories.

Send flowers to the Evans family.