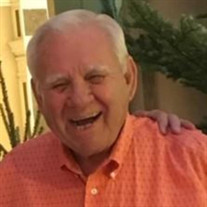 Roark Samuel Rohe was born July 15, 1948 to Gordon Samuel and Beverly Salley Rohe and went to home to be with his Lord and Savior on October 10, 2020. He attended schools in Dallas, Houston, and the American School in Beirut, Lebanon. He attended Tarleton State University for a year and then was drafted into the United States Army. He served in the 4th infantry in the Central Highlands of Vietnam on a mortar platoon. After his service, he attended Sam Houston State University where he received a Bachelor of Science degree in Animal Science. He married Cindy Dorrell Rohe in 1971 and they established their home in Huntsville. They had two children, Roark “Seth” Rohe and Scott Samuel Rohe. Roark was the manager of Phelps Water Supply for forty-one years. He was a member of Phelps Methodist Church where he held the position of treasurer for forty years. He served as president of the Walker County Farm Bureau for several years and was active in the Walker County Fair Association in many different positions. He loved to build and create new things. He was particularly proud of the many permanent improvements he helped make to the fairgrounds. He also loved to build barns, entryways, and houses. His favorite saying was “I’ve got everything it takes to do the job.” Roark loved to cook and feed people and try new recipes. For years he would help cook for crowds of people and banquets. He and friends rebuilt an old fire truck and converted it to a barbeque pit on wheels. They called themselves the Pine Valley Fire Brigade and could be found at cook-offs serving as many people as possible. He seemed to always have a smile and his laugh could be heard a half mile away. He also loved a good argument. He liked jazz and very loud rock music. You never saw him without a book to read or to listen to on tape. He loved technology and had an affinity for remote controls and gadgets. Roark was preceded in death by his parents, his son Seth, and his brother Bruce Rohe. He is survived by his wife of forty-nine years, Cindy Rohe, his son Scott Rohe and wife Christine and two precious grandchildren, Seth William Rohe and Kaci Nicole Rohe who were the light of his life. He is also survived by his brother Duke Rohe, his sister in law Karen Rohe and their children and grandchildren, and his aunt and uncle RW and Frances Pratt and several cousins. Visitation will be held on Thursday, October 15, 2020 from 3:00 to 4:00pm at Sam Houston Memorial Funeral Home in Huntsville, Texas, with a memorial service immediately following at 4:00pm. Memorial condolences to the family may be made at www.shmfh.com. Those wishing to view the service virtually, may follow this Zoom link: https://us02web.zoom.us/j/84827238072?pwd=YnN4QTNtTk9SaThObDFhSVZtcStwZz09 Meeting ID: 848 2723 8072 Passcode: 008881 One tap mobile +13462487799,,84827238072#,,,,,,0#,,008881# US (Houston) Dial by your location +1 346 248 7799 US (Houston) Meeting ID: 848 2723 8072 Passcode: 008881

Roark Samuel Rohe was born July 15, 1948 to Gordon Samuel and Beverly Salley Rohe and went to home to be with his Lord and Savior on October 10, 2020. He attended schools in Dallas, Houston, and the American School in Beirut, Lebanon. He attended... View Obituary & Service Information

The family of Roark Samuel Rohe created this Life Tributes page to make it easy to share your memories.

Send flowers to the Rohe family.