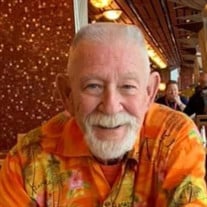 Richard Lee Summers Jr. born February 17, 1939 went to be with our Lord on February 3, 2021. Born to parents Richard Sr. and Dollye Anglin Summers in Aransas Pass, Texas. Richard was raised in Baytown, Texas where he graduated from Robert E. Lee High School. He went on to attend The University of Texas in Austin, where he obtained his bachelors and master’s degrees in chemistry. He went on to work for DuPont where he retired after 34 years of service. Richard married Carolyn Kay Center in 1959 and together they had three daughters, Sharon, Gaye and Lisa. In 1987, Richard married Linda May Fincher and with her son, Carl, they became a blended family. Richard enjoyed traveling, taking cruises with Linda in the Caribbean and spending time with family. He was an avid sports fan and as an UT alum, he cheered for all teams in burnt orange. Finding retirement full of honey-dos, he went back to work providing the U.S. Census Bureau with 20 years of service. Preceded in death by his parents, Richard Sr. and Dollye Summers; and his daughter, Sharon Summers. Richard is survived by his wife, Linda Summers; daughters, Gaye Sylvester, husband Joel; and Lisa Gaige, husband Robert; step-son, Carl Fincher, wife Debbie; four granddaughters, Brittney Liesmann, husband Jacob; Taylor Hubert, fiancé Garrett; Kasie Penrod, husband Tray; and Sarah Gaige; three great-granddaughters Samantha Swearingen-Penrod, Zoey Penrod, Izzabella Penrod; and one great-grandson, Wade Liesmann. A memorial celebration of Richard’s life will be held on Monday, February 8, 2021 at 2:00 PM at Sam Houston Memorial Funeral Home in Huntsville, TX. In lieu of flowers, donations can be made in his memory to the Rita B. Huff Humane Society, https://rbhhumanesociety.org. Memorial condolences to the family may be made at www.shmfh.com.

Richard Lee Summers Jr. born February 17, 1939 went to be with our Lord on February 3, 2021. Born to parents Richard Sr. and Dollye Anglin Summers in Aransas Pass, Texas. Richard was raised in Baytown, Texas where he graduated from Robert E.... View Obituary & Service Information

The family of Richard Lee Summers Jr. created this Life Tributes page to make it easy to share your memories.

Send flowers to the Summers family.