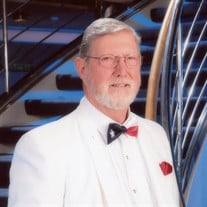 Rex Young Davis, 82, of Huntsville entered paradise on January 31, 2021. Rex was born June 24, 1938 in Beaumont, TX, to William Wilbourne Davis and Ivie Jane (Young) Davis. Rex spent his youth in Penns Grove, NJ. His father died when he was 16 years old; his mother rebuilt her life and went back to college. After graduating from high school, he attended the University of Virginia where he played basketball and graduated with a degree in Mechanical Engineering. His mother also completed her studies and they graduated together in 1961. While at the university, Rex met a lovely lady from Mary Washington College who would one day be his wife. After graduating, he moved to Houston, TX. He married Jeannetta Jean McFarland, of Blytheville, Arkansas, on July 4th, 1962 in Denbigh, Virginia. Rex worked for Shell Oil and BP Amoco. Rex loved his family; he raised two children and was active in their various endeavors (Indian Princess & Indian Guides, South Houston Little League & YMCA basketball). He had a passion for catamaran sailing, snow skiing and taking raft expeditions through the Grand Canyon with his family. He loved gardening with Jeannetta. Rex was a faithful Christian and student of the Bible. He served as a deacon and an elder at Central Church of Christ of Pasadena, TX. After retiring from BP Amoco Chocolate Bayou in 1998, he moved to Huntsville, TX. During his retirement, he enjoyed time with his grandchildren, traveling with Jeannetta, took up golf and square dancing. He enjoyed assisting Jeannetta in her produce marketing career. He continued being active in his faith at Huntsville Church of Christ by serving as a deacon and working with the church's mission committee. Rex was quick to offer help to those in need. He was a very generous man who contributed to many charities with happiness; he was truly a "cheerful giver." It was a lesson that he learned well from his mother. Rex believed in the gift of life and showed it by giving 12 gallons (96 pints) of blood to help others during his lifetime. After the loss of his beautiful Jeannetta on January 3, 2007, Rex was devastated and sorrow ridden. God saw his need and he was blessed to find love again and married Carol Harrington of Austin, TX on July 12, 2008. Immediately following their marriage, Rex had a recurrence of prostate cancer; with treatment Rex remained cancer-free during their marriage. Rex and Carol loved their time together and thanked God for bringing them together. They shared a love of dinners at home; travel, especially cruise ships, and saw the world by visiting all seven continents; Rex also loved visits to Seattle and Austin spending good times with his step­ children and step-grandchildren; and visiting his children; attending swim meets and baseball games to see his grandchildren compete. As much as Rex loved travel, he also loved being at home doing minor repairs, gardening and having tee times with his golf buddies; but, most importantly attending services and Bible classes at his church. Rex was a wonderful husband to Carol, as he was to Jeannetta, and they felt blessed to be able to share their lives together. Rex 's last words to Carol were, "I love you," via FaceTime with the help of a compassionate nurse. They were happily married for 12 years. Rex was preceded in death by his wife of 44 years Jeannetta Jean McFarland Davis, his parents William Wilbourne Davis and Ivie Jane (Young) Davis and his sisters Billie Jane Angle and Polly Ann Pilot. He leaves behind his devoted wife of 12 years Carol Harrington Davis; daughter, Dianne Marie Davis Evans and husband Phillip Evans of Kingwood TX; son, Douglas Allen Davis and wife Suzanne Davis of Jersey Village TX ; and step-son Gregory John Harrington and wife Pamela Ann Harrington of Seattle, WA; and Thomas John Harrington and wife Stacy Marie Harrington of Austin , TX,; and much beloved grandchildren, Blake Davis Evans, Phillip Chase Evans, Bailey Marie Davis, Tanner Rex Evans, Avery Suzanne Davis; and step-grandchildren Sean Thomas Harrington, Cara Julia Harrington and Ryan Thomas Harrington; and numerous nieces and nephews. A memorial service will be held at 11 AM on Thursday, February 11, 2021 at the Huntsville Church of Christ located at 3737 Hwy 30 West in Huntsville, TX. Memorial condolences to the family may be made at www.shmfh.com

The family of Rex Young Davis created this Life Tributes page to make it easy to share your memories.