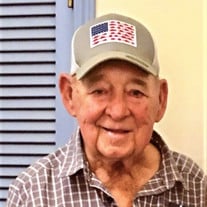 Ray Williams went to be with the Lord, Sunday, May 8, 2022. Ray was born March 22, 1935, to Jim L. and Ira Barnett Williams, who proceded him in death, along with his wife Sandra Williams, sisters Nita Currie and Velma Johnson, stepson Ernie Anderson and step granddaughter Amber Anderson. Ray attended Coldspring High School and was a pitcher on the baseball team. He had a passion for baseball. After high school he continued to play for the Cook Heat Treating team, where he worked for 15 years. Then he worked for ILA24 in Houston for 30 years. Ray loved working and worked both jobs for many years. He was a Master Mason at the East Houston Masonic Lodge 1299. After retiring, he moved back home to his "high rise" as he liked to call it, in Staley, Texas, where he became a member of Christian Faith Church. Ray was a people person and could light up a room with his energy and happiness. You always knew Ray had arrived because the dancing, singing, and jokes would start. He loved fishing, hunting and a good adventure. One such adventure was he wanted to rodeo, but his mom put a stop to that adventure. He would ride his horse "Jack" from Staley to Oakhurst every day to catch the bus for school. He was a great father, brother and loved his family and friends dearly and was always ready to give a helping hand. He is survived by his children, Jimmy Williams and Cindy Tieken, grandchildren Brook and Jared, great grandchildren Layla and Mayra, Stepchildren Amanda, April, and Cindy, three step grandchildren, numerous nieces, nephews and friends. The family would like to thank River Pointe of Trinity, especially Cody, Mandy and Jordan for the care he received. Visitation will be held Friday, May 13, 2022 at 12:00 PM at Sam Houston Memorial Funeral Home, with services following at 1:00 PM. He will be laid to rest at Mount Capers Cemetery in Oakhurst. Memorial condolences to the family may be made at www.shmfh.com.

Ray Williams went to be with the Lord, Sunday, May 8, 2022. Ray was born March 22, 1935, to Jim L. and Ira Barnett Williams, who proceded him in death, along with his wife Sandra Williams, sisters Nita Currie and Velma Johnson, stepson Ernie... View Obituary & Service Information

The family of Rayburn Williams created this Life Tributes page to make it easy to share your memories.