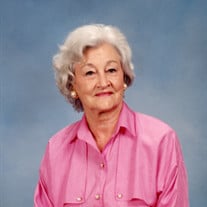 Polly Anna Fowler Holbrook was born June 15, 1921 to Seab Reese and Lester Chandler Fowler in Carnesville, Georgia. She met the love of her life Robert Banks (Tim) Holbrook in 1941 while he was visiting family in Georgia. After a long-distance courtship and the impending war, Polly boarded a train in Atlanta, Georgia and traveled alone to Chico, California where Tim was stationed with the Army Air Corp and were married on March 25, 1944. After the war, Polly and Tim settled in Beaumont before moving to Houston for Tim to attend Dental School. They settled in Huntsville in June 1954. Polly was active in many volunteer organizations including Huntsville Garden Club, Den Mother for her son's Cub Scout Pack, and troop leader for her daughter's Brownie Group. She was also very involved in the United Methodist Women's Group at the First United Methodist Church, a member of the Builders Class and later the Joy Class. She loved creating items for Granny's Kitchen each year. Her happiest times were searching for the next great antique and spending time with her family. Polly is preceded ln death by her parents, her husband Tim Holbrook, brothers Gene Fowler and James Fowler, and her sister Lou Fowler Robinson. She is survived by her son Steven Holbrook and wife Dianna, her daughter Leesa Holbrook Williams and husband Tracy. Grandchildren Jason Holbrook and wife April, Jacob Holbrook, Kristin Williams Evans and husband Pete and Allison Williams. Great Grandchildren Jared Holbrook, Reed Holbrook, Nate Holbrook, Olivia Evans and William (Liam) Evans. Brother Aubrey Fowler and Sister Kathryn Duggan. Polly is also survived by friends who became family Loretta Bradford, her companion and dearest friend for the last seven years and Joenell Durst. These ladies were truly our angels on Earth and we will never forget their loving care. The family will receive friends on Friday, May 7, 2021 from 1:00pm to 2:00pm at Sam Houston Memorial Funeral Home in Huntsville, TX with services immediately following the visitation. She will be laid to rest at Brooke Cemetery on FM 980. In lieu of flowers, please consider making a donation in Polly's memory to The Walker County Senior Center, 340 State Highway 75 N, Huntsville, Tx 77320. Memorial condolences to the family may be made at www.shmfh.com.

Polly Anna Fowler Holbrook was born June 15, 1921 to Seab Reese and Lester Chandler Fowler in Carnesville, Georgia. She met the love of her life Robert Banks (Tim) Holbrook in 1941 while he was visiting family in Georgia. After a long-distance... View Obituary & Service Information

The family of Polly Anna Holbrook created this Life Tributes page to make it easy to share your memories.

Send flowers to the Holbrook family.