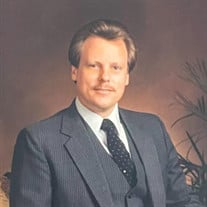 Patrick Stephen Pry passed into the arms of Jesus on Nov 3, 2020, in the place he loved second most: outdoors, at his deer blind. He’d been known to say that if he ever began to lose his faculties, to put him in his deer blind with a cooler of Diet Coke and Oreos, since that’s the only place he’d rather be if not with his family. Born in Houston to the late William “Bill” Pry and Jessie “Ji” Pry on May 21, 1952, the third of three sons, Pat grew up to be a wonderful husband and father as well as a fantastic friend to all fortunate enough to make his acquaintance. Unbeknownst to Pat, his high school friend Cheryl would later become the love of his life. Pat attended Texas A&M University, where he graduated, as a proud member of the Corps of Cadets in 1974 with a degree in Industrial Distribution. During his sophomore year at Texas A&M, Pat grew closer to God, and became actively involved in his Church. Ever the fearless extrovert, when Pat woke up one morning after college with Cheryl’s phone number in his head, he called her up for a date. His bold move worked, and they married in December 1981, thus embarking on a beautiful life of love, raising two sons together, and tucking in his t-shirts [much to his sons’ dismay]. Pat was always the first to volunteer for hauling the camp trailer for his sons’ Boy Scout troop, or to serve his church community whenever a need arose, especially if that included him getting to be outdoors, drive his tractor, or use the “biggest and baddest” version of whatever tool or vehicle was needed. He loved to shoot and hunt and was quick to offer to teach family or friends to shoot trap. His family fondly remembers some of his best qualities, like unshakable joy, thoughtfulness, consistency, and tremendous work ethic, recalling that he couldn’t stand to be idle and preferred to be doing something productive. Working in Houston at Warren Electric, then Appleton, Pat commuted from Huntsville daily for many years without complaint. Unable to bring himself to slow down to full retirement, Pat dabbled in consulting in his final years. In 2019, Pat and Cheryl traveled overseas to Zambia, and enjoyed breathtaking beauty at Victoria Falls, seeing African wildlife on Safari, and appreciating a new perspective of the world. Pat’s enormous heart was not merely focused on the scenery or incredible experience; he was moved by seeing the needs of the people close up, and upon returning home, focused more fervently on supporting international mission-work. Whether stopping on the way home from work to pick up some French Fries for Cheryl, helping Chris wire a new shed, or being available to talk on the phone at any hour to his son Jake, Pat’s life was marked by thoughtfulness, big bear hugs, and throwing in dad-jokes at any and every opportunity. Nearly everything Pat did was to connect with his wife, his children, and others. His greatest joys were found in being Cheryl’s husband, Jake and Chris’ dad, and Jennah’s father in law. Pat is survived by his wife Cheryl Pry; children Jake Pry, Christopher Pry and his wife Jennah; brothers William Pry and Michael Pry. He is preceded in death by his parents, and his sisters-in-law, Sandra Pry and Laura Pry. Celebration of Pat’s Life Service will be held at 10am, Tuesday, Nov 10th, at University Heights Baptist Church, 2400 Sycamore Ave, Huntsville, TX 77340. In lieu of flowers, donations are being accepted in Pat’s name to Living Water International (https://water.cc/aboutlivingwater), to honor Pat’s passion for helping others.

Patrick Stephen Pry passed into the arms of Jesus on Nov 3, 2020, in the place he loved second most: outdoors, at his deer blind. He&#8217;d been known to say that if he ever began to lose his faculties, to put him in his deer blind with a... View Obituary & Service Information

The family of Patrick Stephen Pry created this Life Tributes page to make it easy to share your memories.

Send flowers to the Pry family.