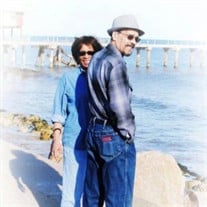 Orlando Cosmo Ortiz, Sr. was born the oldest son to the union of Huldarico Ortiz and Maria Ayala Ortiz, on February 6, 1956 in Rio Piedras, Puerto Rico. Orlando relocated to New York City as a young child and remained until joining the United States Army in 1981. Orlando was educated in the New York City school system after which he served his country, attended college, and traveled the world. Orlando was honorably discharged from the C Battery 1st Division 82nd Field Artillery Unit, Fort Hood, TX 1992. Prior to joining the United States Army, Orlando met love of his life, Madeline Gunn Ortiz while both worked as Paralegal Assistants within the Bronx Supreme Court. Orlando and Madeline were married for over 40 years. From the union three children were born, Leona, Orlando, and Nicholis. After separating from the military, Orlando was employed by the Texas Department of Criminal Justice (TDCJ) and a Correctional Officer, promoted to an Auditor, and served the state honorably until his retirement. Orlando loved his family, fishing, reading history materials, various music genres, and playing his electric guitar. Orlando departed this life during the afternoon of September 29, 2020. He leaves to cherish his memory: his devoted wife Madeline; his children: Leona (Devin) Burns of Charlotte, NC, Orlando C. Ortiz Jr., and Nicholis Ortiz of Huntsville, TX; grandchildren: Javon, Jada, and Jasmyne; siblings: Lucy Ortiz, Martha Ortiz, Arcelis (Andrew) Richards, Wanda Ortiz- Hernandez, Diana Ortiz, Huldarico Ortiz Jr. (Sadie), and Ernie Ortiz (Zita), and a host of nieces, nephews, cousins, and friends. He was preceded in death by his father: Huldarico Ortiz; sister: Debbie Ortiz; father-in law: Malvin Gunn; mother-in-law: Leona Gunn, and sister-in-law: Lucia Gunn. II Corinthians 4:16-18 Therefore we do not lose heart. Even though our outward man is perishing, yet the inward man is being renewed day by day. For our light affliction, which is but for a moment, is working for us a far more exceeding and eternal weight of glory, while we do not look at the things which are seen, but at the things which are not seen. For things are temporary, but the things which are not seen are eternal. The family will receive friends from 8:00am to 10:00am on Wednesday, October 7, 2020 at Sam Houston Memorial Funeral Home in Huntsville, TX, with a service beginning at 10:00am. He will be laid to rest with full honors at Houston National Cemetery in Houston, TX. In lieu of flowers the family requests contribution to the American Heart Association (www.heart.org). Memorial condolences to the family may be made at www.shmfh.com.

Orlando Cosmo Ortiz, Sr. was born the oldest son to the union of Huldarico Ortiz and Maria Ayala Ortiz, on February 6, 1956 in Rio Piedras, Puerto Rico. Orlando relocated to New York City as a young child and remained until joining the United... View Obituary & Service Information

The family of Orlando Cosmo Ortiz Sr. created this Life Tributes page to make it easy to share your memories.

Orlando Cosmo Ortiz, Sr. was born the oldest son to the union...

Send flowers to the Ortiz family.