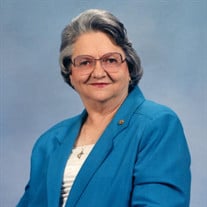 Opal Payne Walters, passed away peacefully at age 86 in Bryan, Texas of natural causes. She is formerly a resident of Huntsville, Woodville, and Waco, Texas, and was born January 11, 1934, in western Walker County, Texas, near the South Bedias Creek. This area on FM 1696, now known as the Payne Ranch, as established by her parents in the late 1920s, was the site of a sizable logging operation, sawmill, chair factory (with cowhide), and other ranching and farming operations when Opal was born. At this time, over 100 people lived in the country community, with many residing in tents. In the late 1940s, Opal moved to Huntsville to attend public school living with her mother who ran a boarding house across the street from Sam Houston State Teachers College. Active in many organizations, Opal was especially fond of the Future Homemakers of America (FHA). Later in life, one of her favorite stories to tell was about attending the FHA national convention in Kansas City and her historic round-trip train ride. After graduating from Huntsville High School in 1951, Opal attended Sam Houston State Teachers College where she was active in several organizations, including the Annie Gibbs Society. This is where she met her future husband Milton Walters of Buna, Texas, at a Pioneer Roundup event. After graduation and marriage in 1955, Opal and Milton moved to Waco. In the 10 years they lived there, Milton worked for the Waco school system, and Opal was mostly a full-time housewife and mom as their only child, Dwayne, was born in 1957. Opal and Milton enjoyed activities with the Speegleville Saddle Club, where they met their life-long friends Sonia and Joe Kendall. As Dwayne got older, in the early 1960s, the family spent less time with horses and more time with church activities and square dancing. In 1967, Opal, Milton, and Dwayne moved to Woodville to engage in the adventure of running a White’s Auto Store franchise. After 3 years with the franchise, Milton moved to teaching Industrial Cooperative Training at the local high school and was joined by Opal teaching Distributive Education for several years. In Woodville, Opal was active in civic and non-profit organizations including The Dogwood Festival and the Methodist Church’s Wee Wisdom preschool program. Opal and Milton moved to Huntsville in 1980 where Milton taught in Huntsville ISD. This move allowed Opal to be closer to her aging mom and to help with family ranching activities. Over the next twenty plus years, in addition to Opal and Milton building their “dream house”, they also participated in more non-profit and civil organizations, agricultural operations, and were active members in the First Methodist Church. During these years, Opal especially enjoyed RV travel and taking her two grandsons on cross-country adventures as much as possible. In 2010, after the passing of Milton, Opal moved to the Carriage Inn in Bryan, Texas where she enjoyed the social activities, day trips, musical entertainment, and particularly the church services and hymns. Throughout Opal’s life she engaged in hobbies that were closely related to her college degree in Home Economics; mainly sewing, cooking, and “socializing!” Preceding Opal in death is her husband of 54 years, Milton Walters (1928-2009), her parents, William Walter. “Bill” and Idelle Strawther Payne, her brother Harold Ray, and her brother and his wife, Billy Don and Lanelle Payne. Opal is survived by her son and his wife, Dwayne and Diane Walters, her grandsons Brandon and Kent Walters and their spouses, and her Payne family niece and nephews Donnell, Michael, Larry, and Marcus and their spouses. Opal is also survived by numerous relatives and friends throughout Texas and Louisiana, especially in the Brazos, Limestone, Jasper, Tyler, Madison and Walker counties. Opal was always appreciative of the care and support she received from various organizations, facilities, family members, and friends. The family also wishes to thank the numerous friends and family that have been involved in the lives and care of Opal and Milton. Most recently, grateful appreciation goes out to The Lexington Center, The Carriage Inn, St. Joseph Hospital, St. Joseph Manor, and Hospice Brazos Valley. Final arrangements have been made with the Sam Houston Memorial Funeral Home, Huntsville, Texas. Visitation and viewing will be at the funeral home Friday, October 23 from 4:00 P.M. to 7:00 P.M. A graveside service for family and close friends will be held at the McAdams Cemetery Saturday, October 24 at 1:30 P.M. Memorial condolences to the family may be made at www.shmfh.com. In lieu of flowers and gifts, the family requests donations be made, in Opal’s name, to either the First Methodist Church of Huntsville or Hospice Brazos Valley (non-profit). https://huntsvillefirst.org/ https://www.hospicebrazosvalley.org/donate

Opal Payne Walters, passed away peacefully at age 86 in Bryan, Texas of natural causes. She is formerly a resident of Huntsville, Woodville, and Waco, Texas, and was born January 11, 1934, in western Walker County, Texas, near the South Bedias... View Obituary & Service Information

The family of Opal Payne Walters created this Life Tributes page to make it easy to share your memories.

Opal Payne Walters, passed away peacefully at age 86 in Bryan,...

Send flowers to the Walters family.