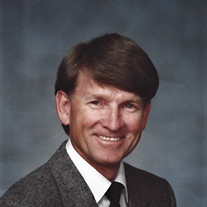 Oneil McCaffety passed away on Saturday, March 5th, 2022 in Castle Rock, Colorado. He was 88 years old. Oneil was born in Walker County, Texas to R.H. and Edna Mae McCaffety on November 22, 1933. Growing up with his family in Huntsville, Texas, Oneil graduated from Huntsville High School where he was known as the "the guy with the educated toe" kicking field goals for the football team with his bare foot. He graduated from Sam Houston State College, moving to Sour Lake Texas where he pursued a career teaching math and physics. After joining NASA Oneil became a part of the Mission Planning and Analysis Division and was there during the Apollo launch. His career at NASA lasted almost 23 years. Oneil moved to Castle Rock Colorado in 1984 to marry Janice Hall McCaffety. He worked as a home builder in the Castle Rock area before retiring. Oneil loved to ski, play golf, and to participate in any activity where he could be outdoors. He spent countless hours watching his grandsons play baseball, football, soccer and LaCrosse. After retirement, he and a friend organized a non-profit horseback riding program for developmentally disabled children where he was the director for 20 years. Despite living in Colorado for the past 38 years, Oneil was always a Texan at heart and longed to move back there one day. Oneil is survived by his wife, Janice McCaffety, 4 stepdaughters, 12 grandchildren, and 4 great grandchildren. He is also survived by his brother, Edward (Joe Mac) McCaffety, his sister June, and numerous nieces and nephews. A graveside service and celebration of life will be held on Saturday, April 2nd, at 11:00 at the Oakwood Adickes Addition Cemetery, 700 Martin Luther King Dr., in Huntsville, Texas. A BBQ reception will be held immediately following the service at La Buena Vida, home of Lynita and Jack. Memorial condolences may be made for the family at www.shmfh.com.

Oneil McCaffety passed away on Saturday, March 5th, 2022 in Castle Rock, Colorado. He was 88 years old. Oneil was born in Walker County, Texas to R.H. and Edna Mae McCaffety on November 22, 1933. Growing up with his family in Huntsville, Texas,... View Obituary & Service Information

The family of Oneil McCaffety created this Life Tributes page to make it easy to share your memories.

Oneil McCaffety passed away on Saturday, March 5th, 2022 in Castle...

Send flowers to the McCaffety family.