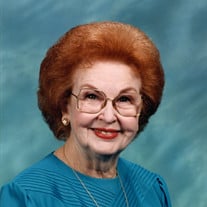 Norma Caldwell Farris was born on November 18, 1928 to Claud Austin Caldwell and Thelma Maines Caldwell in Houston, Texas. She went to be with the Lord on January 25, 2022, at the age of 93. Most of her growing up years were in Houston. Her family's ranch was in Evergreen, Texas. It was always a big part of the lives of the Caldwell family. The family moved to their beloved ranch in 1942 and Norma finished high school in Coldspring, Texas in 1945 as Valedictorian. She received many scholarships to different colleges and universities but chose the one from Sam Houston State Teachers College to be close to her family. Her dad had suffered several strokes. Due to the strokes, Norma had to ride her horse Trixie and take her dog Shep, to check their cattle and fences. She was very busy in her high school years, being her dad's legs and working the ranch. This was all during World War II. She met and married her husband, James Elwin Farris while attending college. They married in a garden ceremony in the front of the ranch home. Her older brother, Jim, who has a green thumb and is very artistic, decorated the yard. They married on May 25, 1947. They were married for 69 years before James passed on to his heavenly reward in December 2016. After they married, they lived at the Caldwell Ranch until they moved back to Huntsville for James to finish his college education in 1948. Norma went to work at Mallery and Smither Chevrolet Company. It was her first "real job" besides ranch work. After a couple of years, she had the opportunity to go to work for Huntsville National Bank. Norma's daughter, Marla Beth, was born in December 1952. Norma was fortunate to be able to stay home for 2 years, then she went back to work at the bank for about 3 years. At that time, she had her son in 1958, James Michael (Jim) Farris. She continued to stay at home until Jim started 1st grade. At that time, she went back to college to get her teaching degree, which she accomplished in 3 years. In 1978, Norma got her real estate salesman license and went on to be a broker. In 1980, Norma and James opened their own real estate office, Farris Realty, Inc. They really enjoyed their over 20 years in the real estate business together, serving Huntsville and surrounding areas, before they retired. Norma experienced salvation at an early age. She and her older brother, Jim, sang at local churches in their area. Her whole family sang beautifully. They loved to gather around the piano for sing-a-longs. Her love of the Lord led her to many Ladies Bible Studies. She and James were always active together in their church. For 30 years, Norma and James played in a couple's bridge club. The friends in the group were very close and were always there for each other. After James' death, Norma eventually sold her home and moved to Carriage Inn. After several months, she became very ill and her health continued to deteriorate to the point she needed to move to Tyler where her grandson, JB Farris and his family live. So, in 2020 she moved and was living in a lovely facility until it was her time to change her address to heaven. She was preceded in death by her husband James, or Pop as he was known; her son, Jim; her grandson Joshua; her older brother, Claudy and her parents. She is survived by her daughter, Marla Farris-Atkinson and her husband Herb of Roswell, New Mexico. Marla and Herb's girls, Beth Ryan and her children, Belle and Kathryn and their other daughter, Mindy Jensen Tanner and her husband Adam. Their children Eli, Faith and Rowan. Jim's son, JB Farris and his wife, Sarah. Their children Keegan, Jackson and Cullen. Norma is also survived by her brother and sister-in-law, Jim and Jenny Caldwell; sister-in-laws, Lucille Benthall and Winnie Sandel and husband Joe. Norma is also survived by a host of loving nieces and nephews and great nieces and nephews. A Celebration of Life will be held on Wednesday, February 2, 2022 at 1:00pm. It will be at her church, Fellowship of Huntsville, 3895 Hwy 30 West, Huntsville, TX. Casket will be opened for viewing before the service. Those wishing to leave memorial condolences for the family may do so at www.shmfh.com. The family asks that any memorial donations be made to: Fellowship of Huntsville Church, PO Box 1200, Huntsville, TX 77342 or Good Shepard Mission, PO Box 7281, Huntsville, TX 77342.

Norma Caldwell Farris was born on November 18, 1928 to Claud Austin Caldwell and Thelma Maines Caldwell in Houston, Texas. She went to be with the Lord on January 25, 2022, at the age of 93. Most of her growing up years were in Houston. Her... View Obituary & Service Information

The family of Norma Caldwell Farris created this Life Tributes page to make it easy to share your memories.

Send flowers to the Farris family.