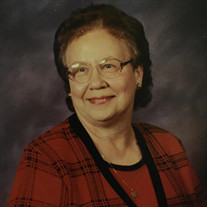 Monica Magdalene Mock Diehl, aged 83, died peacefully in her sleep at The Broadmoor in The Woodlands on April 15, 2021. Monica was born on August 16, 1937 in Dobbin, Texas to John and Barbara Mock where she attended school and spent many years picking cotton. In 1957 she married the love of her life Louis F. Diehl and moved to Houston where they later started Pelican Printing Company. In 1982 Monica and Louis moved to Dobbin where they continued operating Pelican Printing Company until Louis’s death in 1996. Over the years Monica was a care giver to a number of children. Each child she cared for carried a special place in her heart and she loved to receive updates on them and was very proud of their achievements in life. Later when she was no longer able to care for young children, she became a caregiver to the elderly. Monica resided in Dobbin until 2017 when she was diagnosed with Alzheimer’s and moved to The Broadmoor in The Woodlands. Monica maintained her sense of humor and joked regularly with the staff at The Broadmoor. She especially enjoyed “surprise” visits from her family and having the opportunity to see her great grandchildren growing up and hearing about all the fun activities they were involved in. She looked forward to calls from friends and family and the opportunity of talking about the good times of growing up in Dobbin. Monica is survived by her children Monica Rusch-Geyser and husband Jim, Louis Diehl and wife Dana, Mary Gosnell and husband Mike and Kenny Diehl and wife Kathy. Grandchildren are Amanda Finch and husband Mark, Jared Rusch and wife Megan, Chris Diehl and wife Amanda, Jeremy Diehl, Kelsey Rhodes, Christina Gosnell and fiancé Garrett Moore, Elizabeth Miller and husband Taylor, Ryan Rhodes, Cody Gosnell and Tyler Geyser. Monica was also blessed with great-grandchildren: Cooper, Dean, Dixie, Karsyn, Caroline, Dawson and Eva. Numerous nephews and nieces also survive. Preceding Monica in death was her husband of 39 years Louis F. Diehl, siblings Leona Mattern, Adolf Mock, Mary Lou Dennis, Frank Mock, Johnny Mock and Thomas Mock. Pallbearers will be Mark Finch, Jared Rusch, Chris Diehl, Jeremy Diehl, Ryan Rhodes, and Cody Gosnell. Honorary pallbearers are Cooper Finch, Dean Diehl and Dawson Miller. A special thanks to her in home care giver Margie and transitional care giver Mary Louise as well as the staff at The Broadmoor, especially Esther, who provided extra loving care during the pandemic at a critical time in her life when family was not able to visit. Gratitude also to Elysian Hospice care during the last days of her life. A Visitation will be held on Monday, April 19th from 6:00 to 8:00 PM with a Rosary beginning at 7:00 PM at Sam Houston Memorial Funeral Home in Montgomery, Texas. A Funeral Mass will be held on Tuesday, April 20th, at 10:30 AM at St. Mary's Catholic Church in Plantersville, Texas. Burial will be immediately following.

Monica Magdalene Mock Diehl, aged 83, died peacefully in her sleep at The Broadmoor in The Woodlands on April 15, 2021. Monica was born on August 16, 1937 in Dobbin, Texas to John and Barbara Mock where she attended school and spent many years... View Obituary & Service Information

The family of Monica M. Diehl created this Life Tributes page to make it easy to share your memories.

Send flowers to the Diehl family.