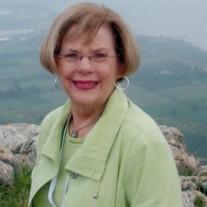 On Monday, May 17, 2021, Mildred “Millie” Casparis, loving wife, mother, and grandmother passed away in her home with her family and her friends at her side. Millie was born on February 24, 1939 in Austin, Texas to Harvey and Allie Deen. She grew up in West Austin, graduated from Austin High School, and attended Centenary College of Louisiana. Millie returned to Austin where she later met her future husband, Jim Casparis, on a blind date. A short time later, they were married on April 29, 1972. After purchasing their newly built dream home, they became parents and raised their two children, daughter Carey and son Jason. Millie loved her children “with every fiber of her being” as she proclaimed often and proudly supported them in all of their activities and endeavors. It’s no secret that she also loved her bling, purses, shoes, recipe books, wine, and traveling with her husband and friends. Millie’s true passion could be found a few blocks away at St. Mark’s Episcopal Church. She joined the church in the early 80’s and proudly called it home for close to 40 years. During that time, she was involved in various ministries, however her most noted and favorite was being a dedicated member of the Altar Guild as well as the Altar Guild Director. She took pride in making sure the Altar remained in pristine condition as well as keeping the linens spotless. Millie was also a member of the St. Mark’s Marthas and a devoted member of the Daughter’s of the King. In the Spring of 2017, Millie and Jim left Austin and traded the big city for a much slower paced country life in Montgomery, Tx. She occupied her time with watching cooking shows, online shopping, and helping raise animals. Whether it was mixing a bottle of milk to feed Pricilla and Trudy the goats, Lucky the lamb, Bella and Lucy the deer, or Sonny the calf, Millie became the best surrogate mom. In addition to making sure Jim’s chicks remained warm under a heat lamp and helping care for the dogs and cats, they were all her babies who spent more time inside her house than outside. Millie could be heard saying, “You are so cute”, which was soon to be discovered she was only referring to her 4-legged family members. Millie was preceded in death by her father Harvey, her mother Allie, and her baby brother. She is survived by her husband Jim of 49 years, daughter Carey Poole and husband Bo, son Jason Casparis, sister Carolyn Wier and husband James, grandchildren Maddie, Tanner, and Jackson Poole, numerous cousins, nieces, nephews, and many dear friends. A funeral service will be held at 10:30 am on Tuesday, June 8th, 2021 at St. Mark’s Episcopal Church in Austin. A private Committal will follow for the immediate family. In lieu of flowers, Millie and her family, have requested that donations be made to St. Mark’s. All funds received in her honor will go to support the work of the Altar Guild.

On Monday, May 17, 2021, Mildred &#8220;Millie&#8221; Casparis, loving wife, mother, and grandmother passed away in her home with her family and her friends at her side. Millie was born on February 24, 1939 in Austin, Texas to Harvey and Allie... View Obituary & Service Information

The family of Mildred "Millie" Casparis created this Life Tributes page to make it easy to share your memories.

Send flowers to the Casparis family.