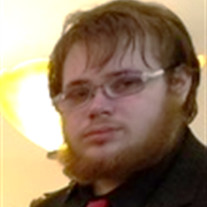 Michael James Mayolo left this earth suddenly on December 7, 2021, with a flight of angels. His absence will leave a great tear in the fabric of his family. Michael was born February 7th, 1997, to Mark and Evelyn Mayolo. When he was about two, his father remarried to Sarah, and Michael joined a new family. Michael is survived by his mother, Sarah (nee Vogt) Mayolo, brother Christopher Mayolo, Grandmother, Kathleen (nee Monroe) Holl, and her husband, Charlie, who Michael knew as "Grandpa", all of Crosby, Texas. Michael was a shining young man who'd only begun to see what life could offer. He spent his youth doing things that most young boys do. He loved playing video games with his brother Chris, and watching movies, but it was imagination that set him apart. Michael saw the world through the eyes of a child and was inventive in his ability to write and tell the most intriguing stories. Michael was his father's son in that he too had a penchant for taking things apart to see how they went together. His mind never stopped working. Michael was a believer. He was making his way slowly through the Bible, one book at a time. He looked for clarity and often asked questions for understanding. He and his brother Chris shared the strength of a bond only brothers can know. Michael had a teasing habit that the family fondly remembers of answering questions with a little drawn out "nooooo," which always meant "yes". He will always be remembered as a caring, loving young man. Michael was predeceased by his father earlier this year, Mark Allen Mayolo. It was a loss from which Michael never quite recovered. Others waiting to greet Michael in Heaven include his grandfather, Bernard Mayolo, of Lincoln, Nebraska, and his grandparents, Eugene and Ethel Vogt, of Montgomery, Texas. Do not fear for I am with you. Do not be dismayed, for I am your God. I will strengthen you and help you. Isaiah 41:10 A graveside service will be held at 2:00pm on Monday, December 27, 2021 at Smith Memorial Park in Willis, Texas. For those wishing to leave condolences for the family, you may do so at www.shmfh.com. Donations in lieu of flowers may be sent to the www.AFSP.org charitable organization online in memory of Michael.

Michael James Mayolo left this earth suddenly on December 7, 2021, with a flight of angels. His absence will leave a great tear in the fabric of his family. Michael was born February 7th, 1997, to Mark and Evelyn Mayolo. When he was about two,... View Obituary & Service Information

The family of Mr. Michael James Mayolo created this Life Tributes page to make it easy to share your memories.

Send flowers to the Mayolo family.