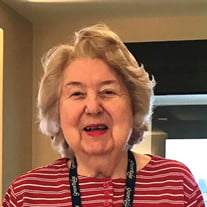 Mary Elizabeth "Connie" Conner Hardy was born on September 7, 1929 and passed away on March 12, 2022 from COVID. She is survived by her son, David Hardy, daughter-in-law Phyllis Hardy, grandchild Leslie Gabrielle Hardy, great-niece/grand-daughter Shelley Karn and husband Mike Karn, sister Robinette Zucha, and our next-door neighbor Ms. Betty, and her children King, Keslie, & Britt Dobbins. She graduated from Baytown High School (Valedictorian), UMHB 1946 and attended Sam Houston College - Business Major (where she adopted the name Connie) from 1947-1950. She married William Ray Hardy on November 12, 1950. She went to work in Houston & paid off one third of their house in the first year. She became her husband's campaign manager, treasurer & public relations manager while he was District Clerk of Harris County. She raised two sons, Leslie & David. Leslie passed away Jan 29, 2007. David worked in Pediatrics at S&W in Temple from 1979 to 2012. The apple of her eye has always been her granddaughter Gabrielle Leslie Hardy. She lived in Belaire, Tx until 1969, when she moved her family to Addicts, Tx where they lived until 2004 and then moved her family to Elkins Lake in Huntsville, Tx. She moved to Austin in October 2014, to live at Buckner Villas. Connie believed that voting and the democratic process was one of the most important aspects of being an American. Throughout her adult life, she was an election judge in every election in whichever community that she lived in. Connie was an organizer, a motivator, the focal point of her family and the reason that it prospered and succeeded. While at her independent living facility in Austin, she taught all her friends how to play Bridge. Connie created an entire curriculum and enjoyed sharing her knowledge with others. She was also quite active walking on the treadmill and riding the stationary bike at her facility and even got a physical activity award for her efforts! She was a wonderful mother, grandmother, aunt & wife. Connie ALWAYS sacrificed, remained totally devoted, committed & faithful to her whole family and her husband prior to his death in 2013. She was tirelessly efficient & wise, with a little bit of a control streak as well but will be great missed by all. A funeral service will be held on Thursday, March 17, 2022 at 1:00 PM at Sam Houston Memorial Funeral Home in Huntsville, Texas. Interment will follow at 3:00 PM at Old Waverly Cemetery. Memorial condolences to the family may be made at www.shmfh.com. The family requests that all those in attendance please wear a mask. Also in lieu of flowers, please donate and make your check payable to: BSW CTX Foundation 2401 South 31st Street - MS20-S103 Temple, TX 76508 Send a note with the check, or in the memo portion of the check, memorial for Connie Hardy, to benefit McLane Children's Medical Center (MCMC) Innovation Fund.

The family of Mary Elizabeth "Connie" Conner Hardy created this Life Tributes page to make it easy to share your memories.