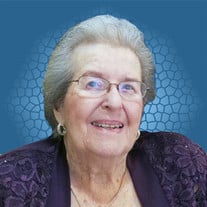 On October 27, 2021, Mrs. Lizzie Mae Street Woodruff Harrell Barnes, age 91, passed away in Huntsville, Texas after a brief illness. Services will be held November 6, 2021 at First Baptist Church of Coldspring, 100 E. Pine Ave, Coldspring, Texas. Visitation with family and viewing will take place at 1pm, with the memorial service beginning at 2pm. Burial will follow in the Carter Cemetery, Carter Road and FM 946, Willow Springs. In lieu of flowers, donations may be made for the upkeep of Carter Cemetery, c/o Gary Jenke, 51 Carter Road, Coldspring, Texas 77331. Please make checks payable to Gary Jenke. Lizzie Mae is survived by daughter Rebecca K. Woodruff of Huntsville, Texas, daughter Lisa M. Mize and husband Robert Mize of Coldspring, Texas, daughter-in-law Sherry Woodruff of Richmond, Texas, grandson Joseph David Woodruff and wife Kimberly of Victoria, Texas, granddaughter Amanda Woodruff Blaylock and husband Derek of San Antonio, Texas, grandson Rayne Mize and wife Kayla of Coldspring, Texas, granddaughter Kaitlin Mize Scariano and husband David of Houston, Texas, great-grandchildren Selah, Amaris, Josiah, and Adalee Blaylock, Ava and Alyssa Mize, and Ashlynn Looney, stepsons Mark, Chris and Tony Harrell, one uncle, George Henry Carter, age 96, of Katy, Texas, and a great many other family and friends. Pallbearers are George Fain, Brad Street, Kenneth Street, Gary Jenke, Adam Jenke and Jack Pursley. Lizzie Mae was born October 11, 1930 in Willow Springs, Texas to James Elbert Street and Aggie Mae Carter Street. She met her Lord and Savior, Jesus Christ at age 10 at a camp-meeting in Oakhurst, Texas. She was baptized in nearby McCombs Creek, and soon began playing pump organ while her grandfather, Philip Carter, led the singing at Willow Springs Community Baptist Church. She had girlhood dreams of traveling, and being a foreign missionary's wife. Lizzie Mae graduated from India Grace High School, Coldspring, Texas, in 1948, then attended secretarial college in Houston, Texas. After receiving her certificate, she worked as a clerk typist for an insurance agency. On December 25, 1948, she married her high school sweetheart, Joseph Douglas Woodruff (Sr.) and they began their lives together in Houston where Lizzie Mae resumed clerical employment, while Joe Doug was a lineman for Houston Lighting and Power Company. In 1953, while her husband was in the U.S. Army (Korean Conflict), Lizzie Mae lived with her lifelong best friend, Jimmye Ann Hamm (later Hoskins) in Lake Jackson, Texas, and worked at Dow Chemical. Liz and Joe continued to live in Lake Jackson after his return from the army, with Liz continuing her employment at Dow Chemical, while Joe began his studies in Electrical Engineering at the University of Houston. In 1956, Liz and Joe welcomed Joseph Douglas Woodruff, Jr. The small family moved to Houston, and welcomed Rebecca Kay Woodruff in 1961 and Lisa Marie Woodruff in 1963. As Joe completed his studies and began a management career at HL&P, Liz chose a different path and became a full-time wife, mother, and homemaker to her loving family. In 1972, Joe Woodruff, Sr. passed away suddenly, leaving Liz a widow at age 42, with 3 children, ages 16, 11, and 9. With the help of her father, Elbert Street, her brother, James Street, and an uncountable number of loving family and friends, a home was built for her near family in Willow Springs. Liz began her career at the Texas Dept of Human Services in 1973 as a clerical worker and retired in 1993 as an Eligibility Caseworker and LAN Supervisor. During this time, she saw that her children graduated from high school, and received all the higher education they desired. She greatly valued education and was proud to have helped her husband, children, and grandchildren achieve their goals and dreams. Her generosity will always be remembered. After her children's graduations, Liz began fulfilling her lifelong wish to travel and see as much of the world as possible. Her many adventures took her to Acapulco, fall foliage tours in New England, several bus tours with Dan Dipert and DETCOG, tours through California, Canada, and Alaska, plus tours with Beth Sewell and her high school students to the British Isles, and several places in Europe. She realized a lifelong dream when she traveled to the Holy Land with family and friends from church. In the fall of 1981, her father, Elbert Street passed away. In 1985, a friendship from high school was rekindled with Fulton Harrell. They enjoyed spending time together and eventually married in 1986. They lived in Willow Springs, Texas until his passing in 1992. In 2005, after a year of courting, she married Joe Bailey Barnes, with whom she'd been acquainted in her high school days. They lived in Huntsville, Texas until his passing in 2008. In December 2007, Liz lost her son, Doug, who passed away unexpectedly during liver transplant surgery. In early 2008, her best friend Jimmye Ann, and her husband, Joe Barnes, passed away. In November 2008, her mother, Aggie Mae Street, passed away. She bore these great losses with grace, dignity and strength, and was an inspiration to her family, especially during these hard times. In mid-2008, Liz returned to Willow Springs, Texas and moved into her parent's home, living in almost the exact spot in which she'd been born in 1930. In 2010, her daughter, Beckey, came to live with her, and soon they began traveling in a small motor home with a kitty named Thomas the Shadow. They traveled over 22,000 miles and enjoyed it all, but especially the time they spent together. In late 2017, Liz decided to move to the Carriage Inn in Huntsville, Texas, where she made new friends, participated in many activities, and regularly received visitors until the pandemic caused changes. Throughout her long life, Mrs. Lizzie Mae Woodruff Harrell Barnes loved her Lord and her family, and served both with a glad and willing heart. Her steadfast love and support will be greatly missed. Her final words to us were, "I am so loved...I am so loved." "Unable are the Loved to die For Love is Immortality" ~Emily Dickinson Funeral arrangements by Sam Houston Memorial Funeral Home, Huntsville, Texas. Memorial condolences may be made to the family at www.shmfh.com.

The family of Lizzie Mae Street Woodruff Harrell Barnes created this Life Tributes page to make it easy to share your memories.

Send flowers to the Barnes family.