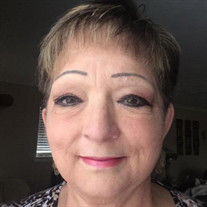 Lisa Renfrow White, age 61, of Montgomery Texas passed away Saturday, January 29th at 10:45 am after a long illness. She was surrounded by her Husband, Mother, Brother, and Daughter as she gained her angel wings and went to be with Jesus. Lisa was born January 2nd 1961 in Houston, Texas. Lisa lived most of her life in Fresno Texas. She graduated from Dulles High School in 1979. She moved to Montgomery Texas where she spent the past 30 years of her life. Lisa held several jobs during her working career including dental assistant, tax clerk, and bank teller. But what she was most proud of was her years of volunteering and then becoming the Administrative Assistant at Montgomery United Methodist Church in Montgomery, Texas. Her position started at the old campus on Pond Street and continued during the building phase of the current location on Highway 105. Her job at the church had a vast array of duties but most remember her for her caring and helpful attitude and everlasting smile. She was also known for her open office door that allowed anyone to come in and feel at home. As some have said, “If you need to find out something or need a question answered, “Go ask Lisa”. She was also instrumental in numerous fundraisers that bought the first church van and built the pavilion that has become the faith center. She also was a huge help in designing and building the prayer garden on the church campus. Her footprints and legacy run throughout the entire church as it sits today. She was preceded in death by her loving father, Robert (Bob) Renfrow. She leaves behind her mom, Agnes Renfrow, of Pearland Texas, her husband of 31 years, Kenneth White of Montgomery Texas, her brother Robert (Robbie) Renfrow, and wife Rachele Renfrow of Needville Texas, and her daughter Heather Duty, along with her husband Bryan, and two adorable grandkids, Hailey (12), and Blake (4), of Marble Falls Texas. She also leaves behind numerous other relatives including aunts, uncles, cousins, and nephews. A memorial service will be held on Thursday, February 3, 11 am at Montgomery United Methodist Church located at 22548 Highway 105 West in Montgomery Texas. Flowers are welcome or you can make a donation to Montgomery UMC Music Ministry. You may leave written memories to her family at www.shmfh.com

Lisa Renfrow White, age 61, of Montgomery Texas passed away Saturday, January 29th at 10:45 am after a long illness. She was surrounded by her Husband, Mother, Brother, and Daughter as she gained her angel wings and went to be with Jesus. Lisa... View Obituary & Service Information

The family of Lisa Kay White created this Life Tributes page to make it easy to share your memories.

Send flowers to the White family.