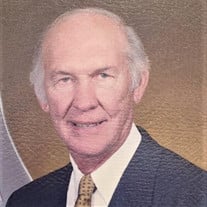 Leo Gordon Brown was born October 4, 1930 in Limestone county and passed March 24, 2021. Gordon was known by many names: Teacher, Coach, Superintendent, husband, father, Grandad, and G.B. Gordon touched and had a positive impact on everyone, including his students, players, teachers, staff, friends, family and his community. He was a devoted Christian who inspired others to live by faith. Gordon was from the small rural town of Groesbeck, Tx. He was one of four siblings. He received a scholarship to play football and attended Sam Houston State University, where he played quarterback for the Bearkats. After graduation from SHSU, he enlisted in the US Army and served his country during the Korean War. His love for education and football led him back to the field and schools, where he coached and taught Biology. Being recognized for his outstanding leadership, and welfare for his students, faculty, and staff in education, he was soon tapped for administration roles in several school districts throughout Texas, and retired after 36 years in education as Superintendent Emeritus from Katy Independent School District. Upon returning to Huntsville, he was appointed the General Manager of Elkins Lake Rec. Corp. where he served for eight years. A constant advocate for student’s success, he continued to pledge his time and resources to support the Fellowship of Christian Athletes, Sam Houston State University Athletics, United Way and numerous other charitable organizations. A member of Rotary for over 50 years, Phi Delta Kappa, the Chamber of Commerce, and the Huntsville Education Foundation. He was recognized for his many accolades, and was inducted into the Texas High School Coaches Hall of Honor, the Sam Houston State University Athletic Hall of Honor and received the SHSU Distinguished Service Award. He is survived by his loving wife Dr. Genevieve Brown who was unwavering in her dedication to caring for her beloved husband, his sons, Larry Brown (wife Patti Brown), John Mandina, daughters, Susan Brown Douthit (husband Dr. Bruce Douthit), Laura Mandina Sparks (husband Stephen Sparks). Grandchildren: Lindsey Douthit Gil (husband Leon), Andrew Douthit (wife Leah), Taylor Douthit (wife Hannah), Blair Brown Hightower (husband Brian), Erin Brown Duncan (husband Sam), Casey Sparks, Christian Sparks and was proceeded in death by Dylan Sparks. He had nine great-grandchildren and many nieces and nephews. Funeral Arrangements: Sam Houston Memorial Funeral Home, March 27, 2021 Lying in state from 9am to 1pm. Reception Elkins Lake Club – 3:30pm – 4:30pm The family is asking in leu of flowers any donation to go to: The Fellowship of Christian Athletes Sam Houston State University – Leo Gordon Brown Scholarship Memorial condolences to the family may be made at www.shmfh.com

Leo Gordon Brown was born October 4, 1930 in Limestone county and passed March 24, 2021. Gordon was known by many names: Teacher, Coach, Superintendent, husband, father, Grandad, and G.B. Gordon touched and had a positive impact on everyone,... View Obituary & Service Information

The family of Leo Gordon Brown created this Life Tributes page to make it easy to share your memories.

Send flowers to the Brown family.