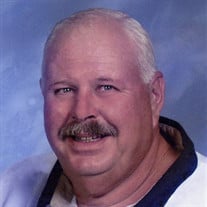 Larry Miller, Sr. gained his heavenly reward early in the morning on March 31, 2021. He passed away peacefully in the hospital following a long 6-week battle. He was born in Houston, Texas August 9, 1954 to Lewis James Miller and Katheryn Camp Miller. He grew up in Houston and he and his family enjoyed many years going to their bay house at Matagorda Bay. Larry graduated from Stephen F. Austin High School in 1974 and pursued sheet metal work for ten years. He moved to Dodge, Texas in 1981 and resided there the rest of his life. He began his second career with TDCJ in 1984 in Corrections and then Laundry Services, where he retired in 2004. He married a city girl, Melissa Avant Miller, in 1990 and turned her into a country girl. They lived in Dodge their entire marriage of almost 31 years. Larry really enjoyed hunting, fishing, music, singing karaoke and firefighting. In 1991, Larry and a few other guys were saying that Dodge needed a volunteer fire department. Together they worked many hours and weeks to form the Dodge VFD, where he served as Captain, Assistant Chief and a first responder for 20 years until his health issues forced him to need to retire. He was so proud that Larry Miller Jr., following in his Daddy’s footsteps, has been serving as a Captain with the DVFD for many years. Larry and Melissa had a karaoke and DJ music business for many years. It all started because of Larry’s love for music and singing karaoke. Again, Larry’s health issues forced him to have to close their business in 2017. Larry and Melissa were active members of Huntsville Church of Christ. He was preceded in death by his parents and both sets of grandparents, a special aunt and special cousin. He is survived by his wife Melissa Miller; son Larry Miller, Jr. and wife Alice; grandson Jacob Miller and girlfriend Kayla Moore; step- grandson Dustin Smallwood; step- granddaughter Tasha Coles and husband Jason; newborn great-granddaughter Kensley Miller; step- great- granddaughter Kayla Boyd and step-great- grandson Nathan Coles; also, by his brother Lewis Miller Jr. and wife Vickie; sister Renee Miller and many other cousins, nieces and nephews. Visitation will be held on Tuesday, April 6, 2021 from 5:00 – 7:00 PM at Sam Houston Memorial Funeral Home in Huntsville, TX. Services will be the following day at Huntsville Church of Christ at 1:00 PM. Interment will follow at Dodge Cemetery. Memorial condolences to the family may be made at www.shmfh.com.

Larry Miller, Sr. gained his heavenly reward early in the morning on March 31, 2021. He passed away peacefully in the hospital following a long 6-week battle. He was born in Houston, Texas August 9, 1954 to Lewis James Miller and Katheryn... View Obituary & Service Information

The family of Lawrence A Miller created this Life Tributes page to make it easy to share your memories.

Send flowers to the Miller family.