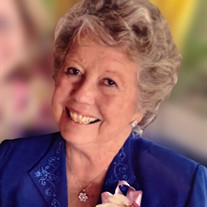 Laverne Hill (Ruby Laverne Small), the matriarch of her family, left this earthly realm on February 25, 2022 at the age of 95. Laverne (also known as ‘MawMaw’ and ‘Aunt Verne’) rejoined her heavenly family and gained her wings. Laverne was born in a small town on a farm outside of Cameron, Texas on October 22, 1926. She was the third of six children of Noble Dewey and Ruby Ann Small. She graduated from Yoe High School at age 16 and took a train to Monroe, Louisiana where she attended Telegraphy School. She met the love of her life, Arthur Lee Tompkins (deceased 1971) and they married in Bellville, Texas on August 5th, 1945. They resided together in Hempstead, Texas where they gave birth to two daughters. Her husband (Lee Tompkins) was serving in the air force during WWII when she went back to work while raising their first daughter. In 1947, WWII was over and they reunited as a family once again. In 1953, they were Blessed with a second daughter. She was a devoted Christian woman and a pillar of strength who gracefully led by example a life of faithfulness and complete surrender to the Lord. She dedicated her spare time to the Baptist church where she poured her heart and soul into teaching Sunday school. Throughout all of her years she touched the lives of many children who attended her church, as well as each and every member of the church congregation. Laverne moved to Houston in 1972 after her husband Lee Tompkins (deceased) passed away in 1971. She began attending church in Houston and met her second husband of 40 years where they resided in Conroe, Texas, Dr. Howard Hill (deceased). She continued to follow her passion and calling in ministry, while her husband Dr. Howard Hill was the Pastor of several Baptist churches in Houston and surrounding areas. Predeceased by: her husband, Arthur Lee Tompkins, second husband, Dr. Howard Hill, daughter, Sandra Lea (Sonny), her parents, Noble and Ruby Small, as well as, her 5 siblings, Mildred, Jane, Noble, Jack and Billy. Survived by: daughter, Barbara Jane Singletary, 4 grandchildren, Greg Mosely (Erika) Gardiner, Leigh Gardiner Hromcik, Michelle Lynn Whorton, Ashley Whorton (Mark) Sanders, her 7 great grandkids, Kelsey, Taylor, Chase, Allie (Gardiner); Dylan, Peyton (Hromcik); Audrey (Sanders) and a host of extended family. If there has ever been an angel on earth, it was Laverne (MawMaw) who has also been described as ‘The Wisest Woman I’ve Ever Met’. She would most likely deny the praises as she remained a humble servant until she left to be with her heavenly Father on February 25, 2022. She had a great big smile that lit up the room and a contagious laugh that was all wrapped up in a bow of love and acceptance. The two most important facets of her life were her Faith in the Lord and her family. There was nothing else in this earthly world that could have come close to the depth of love she carried every waking moment of her life for them. Her Wisdom on ‘Memories’: “Memories are full of love, sorrow, joy, happiness and every emotion God gave us to live a full and meaningful life while here on this earth.” You are invited to join them for a visitation on Thursday 3/3/22 at Sam Houston Memorial Funeral Home, 10129 FM 1097, Willis, Texas 77318 from 5-7pm. The funeral service will be held on 3/4/22 at First Baptist Church of Willis, 12177 Interstate 45-North, Willis, Texas 77378. Following the funeral, there will be a graveside service at Kirby Chapel Cemetery in Prairie View, Waller County, Texas. (location can be found with GPS) Floral donations can be sent to Sam Houston Memorial Funeral Home, 10129 FM 1097, Willis, Texas 77318.

The family of LaVerne Hill created this Life Tributes page to make it easy to share your memories.

Laverne Hill (Ruby Laverne Small), the matriarch of her family,...

Send flowers to the Hill family.