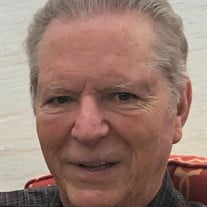 John “Jack” William Winn, of Montgomery, TX, died of complications from ALS, on October 10, 2020; he was 74. Jack was born June 26, 1946 in Hudson, MI to John and Rita Winn, where he was raised. While in the Army, he received a Bronze Star with V device for Valor, Army Commendation Medal, National Defense Service Medal, Vietnam Service Medal, and RVN Campaign Medal, for his service in Vietnam. He was a Sergeant, Non-Commission Officer. After returning from Vietnam he was stationed at Fort Hood, TX, where he later met his future wife on a blind date in Temple, TX. Jack is survived by his wife Connie of 51 years, daughter Tammy Prater and her husband Albert of Bryan, TX, son Chris Winn, wife Wendee and granddaughters Reese and Harper of Cypress, TX, and dear niece Melissa Hickson of The Woodlands, TX. Along with three sisters, two brothers, and many nieces, nephews, and extended family. Jack was a loving husband, father, grandfather (Pappy), uncle, and friend to everyone. He never met a stranger. Jack also loved to play golf, fish, two-step with his bride, and ride his Harley Davidson. Jack is preceded in death by his father and mother, John and Rita Winn, and brother Steve Winn. A celebration of life will be held at the Walden Yacht Club, 13101 Melville Dr., Montgomery, TX, 77356, Friday October 23, from 3:00 pm to 6:00 pm. In lieu of flowers, please consider a donation to The ALS Association of Texas in Jack’s memory. The ALS Association of Texas, 1213 Hermann Drive, Ste 225, Houston, TX 77004.

The family of John William Winn Jr. created this Life Tributes page to make it easy to share your memories.

Send flowers to the Winn family.