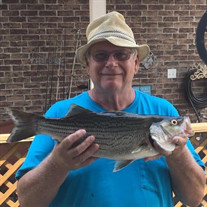 John Joseph Patula, formerly of Lockport, Illinois, passed away peacefully in Conroe, Texas on January 4, 2021 at the age of 71 after a courageous battle with COVID 19. He was born on August 25, 1949 in Lockport, Illinois. He is preceded in death by his parents Anthony and Helen Bernady Patula, and his brother George Patula. John graduated from Lockport High School. He worked as a heavy equipment mechanic for over 40 years while simultaneously farming the Patula family land with his son, Kevin. John was happiest when riding on his combine! John met Sherry in Frankfort. When Sherry’s job took her back to Houston, in 2012, John soon joined her in Texas. They married in a beautiful Florida beach wedding on June 29, 2013. John found his dream home on Lake Conroe, and the couple moved to Willis, Texas where John could “fish off his back porch” John loved the warm Texas weather and traveling around the state, but he never quite stopped missing his farm back home in Illinois. For the past few years, John worked at sewing boat covers in Willis. He enjoyed meeting boaters from all walks of life. John will be especially remembered for his love for his little poodle Bella, who napped on John’s lap every day. John is survived by his wife, Sherry Byrnes, sister Mary Ann Patula Zimmer, his children Kevin (Daphne) Patula and Khara (Bill) Uczen and grandchildren: Charlie, Caleb, Harlie, Quinn and Rylee; his step-daughter Tiffany (Bjorn) Larsen, step-son Michael (Sara) Hutchins, and step grandchildren: Lizzy, Tor, Vicky and Sam as well as his Sister-in-law Kathy Solomon. NOTE: There will not be a service in Texas. A private celebration of life for John will be scheduled in Illinois in a few months. The family has requested in lieu of flowers, memorial contributions be made to Meals on Wheels on John’s behalf to support the many hungry seniors affected by COVID.

John Joseph Patula, formerly of Lockport, Illinois, passed away peacefully in Conroe, Texas on January 4, 2021 at the age of 71 after a courageous battle with COVID 19. He was born on August 25, 1949 in Lockport, Illinois. He is preceded in... View Obituary & Service Information

The family of John Joseph Patula created this Life Tributes page to make it easy to share your memories.

Send flowers to the Patula family.