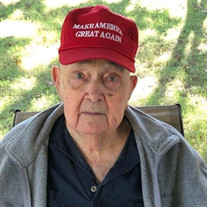 John Hugh O’Banion, passed away Thursday, January 7, 2021, at 11:10 AM, after 94 years of a life well-lived. He was preceded in death by his wife of 72 years, Maebeth Mitcheltree O’Banion. Affectionately known as John Hugh by his family, he was born in Orangefield, Texas, on July 25, 1926, but grew up in nearby Orange. After graduating from Orange High School, he attended Sam Houston State Teachers College where he majored in music but earned his Bachelor of Business Administration degree. He was a veteran of the United States Army Air Corps, scout leader for his sons’ troop, PTA President, and civic volunteer. He married Maebeth, on December 26, 1946, and together, they raised four sons. John worked in the IT department of Shell Oil Company, retiring after 27 years to a home that he had built with his own hands, near Livingston. John loved to travel in their 5th wheel, loved music, building houses, friendships, and life. He is survived by his four sons; John, Jr, and wife Mora; David, and wife Linda; Dan and wife Pamela; Kenneth, numerous grandchildren, great-grandchildren, great-great-grandchildren and a host of friends. There will be a visitation at Sam Houston Memorial Funeral Home, at 1700 Normal Park Dr., Huntsville, Texas, from 5:00 PM to 7:00 PM, on January 21. Memorial services will be held at 11:00 AM, on January 22, 2021 at Northside Baptist Church, located at 1207 FM 980, Huntsville, Texas 77320, with a graveside service at Cline’s Prairie Cemetery, followed by a luncheon back at the church. The family has requested that, in lieu of flowers, donations be made to either the Cline’s Prairie Cemetery Association, P.O. Box 444, Huntsville, Texas 77342; or to Northside Baptist Church, at the above-noted address. Memorial condolences to the family may be made at www.shmfh.com

The family of John Hugh O'Banion created this Life Tributes page to make it easy to share your memories.

Send flowers to the O'Banion family.