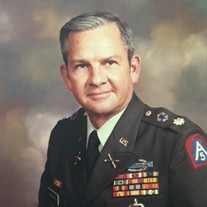 Colonel John Arthur McManners, US Army Retired, was born in Weldon, TX, and spent his formative years in Huntsville. He graduated from SHSU in 1962 with a BS in History and went on to have a long and distinguished life of service. John died peacefully at his home in Elkins Lake on April 22, 2022. Through ROTC, he was commissioned as a 2nd Lieutenant in Field Artillery, spending his initial tour as a paratrooper in the 82nd Airborne Division. John retired in 1992 after a 30-year military career which carried him to many parts of the world including Vietnam, Laos, Germany, England, and Bosnia. During his Laotian tour he was personally recognized by the King of Laos and decorated as a Knight of a Million Elephants, the highest Laotian military honor he could receive. Colonel McManners was the only soldier in the history of the U.S. Army to receive this honor. John was a graduate of the Armed Forces Staff College, the United States Army War College, and the United States Air War College. He also held a master's degree from Webster University. His awards and decorations include Legion of Merit (2); Bronze Star (1); Defense Meritorious Service Medal (1); Meritorious Service Medal (4); Air Medal (2), Army Commendation Medal (2); National Defense Service Medal (2); Vietnam Service Medal (1), Army Service Ribbon (1); Overseas Service Ribbon and Vietnam Campaign Medal. Badges include Senior Parachute Badge and the Combat Infantryman's Badge (CIB). John also held other positions of service such as President of the Sam Houston State University Alumni Association, the Mayor's Veterans Affairs Board, and other community activities. He was honored for his dedication with the Distinguished Alumni Award and the Alumni Association Service Award. John is survived by his wife of 55 years, Geanie Lawhon McManners, of Huntsville, his daughter Shannon McManners of Arlington, VA, and his daughter Kathleen Seleny (Alex) of Fort Worth, TX, and his three grandchildren, Noah Seleny, John Seleny, and Annelise Seleny. Additionally, he is survived by his sister, Mary Ann Lucas (James) of Spring, TX. Visitation will be held May 8th, 2022, from 5:00-7:00 PM at The Sam Houston Memorial Funeral Home, 1700 Normal Park Drive, Huntsville, TX. Memorial services will be held the following day, May 9th, at 11:00 AM, at the First United Methodist Church located at 1016 Sam Houston Avenue in Huntsville. Burial will be held May 11th at 1:30 PM at the Dallas-Fort Worth National Cemetery, located at 2000 Mountain Creek Parkway, Dallas, TX. A special thank you to Gayla and Bobby Lawson and Yvonne Frederick for the hours they gave to John and Geanie during this difficult time. Their love and care was beyond anything we expected. In lieu of flowers, please consider celebrating his life through a donation to the SHSU ROTC Scholarship Fund, the Sam Houston Alumni Association or a charity of your choice. Memorial condolences may be made to the family at www.shmfh.com.

Colonel John Arthur McManners, US Army Retired, was born in Weldon, TX, and spent his formative years in Huntsville. He graduated from SHSU in 1962 with a BS in History and went on to have a long and distinguished life of service. John died... View Obituary & Service Information

The family of Colonel John Arthur McManners created this Life Tributes page to make it easy to share your memories.

Send flowers to the McManners family.