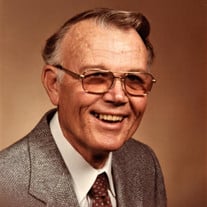 Joe Wilson Larrison went to heaven on June 29, 2021, at the age of 96. He was born February 3, 1925, in Madisonville, Texas, to Evie Wilson Larrison and Finis Floyd Larrison. He graduated from Huntsville High School where he met the love of his life, O'Bera Langley. They were married on February 13, 1943, and their long and beautiful love story continued until she passed in 2013. Joe proudly served his country in the Merchant Marines during World War II and later held membership in the American Legion, our nation's largest wartime service organization. Returning to Huntsville after his discharge, he went to work for the United Gas Company (now CenterPoint Energy) where he loyally served until his retirement 40 years later in 1986. Joe was known for honoring his commitment to the company and his community by taking after-hours calls and calmly resolving customer needs. He served his community as a volunteer fireman for the city of Crockett while living there and as a member of the Chamber of Commerce and Rotary Club after moving back to Huntsville. A man of faith, Joe was a devoted member of the First Baptist Church of Huntsville where he served in many capacities, including deacon and greeter. He found a special bond with his Sunday School class and treasured the camaraderie with other class members and their teacher. Joe (PaPa) was a skilled mechanic and the family's go-to-person for constructing complicated toys, assembling bicycles, mending broken appliances, and fixing broken tractors, cars, and mowers - one more time. He enjoyed fishing, hunting, watching Astros and Texans games, working on his farm in Leon County, attending his grandchildren and great grandchildren's extracurricular activities, and tending to his yard in Huntsville. Joe was a loyal and loving husband, father, grandfather, great grandfather, uncle, and friend. He is preceded in death by his parents; his wife, O'Bera; brothers Jeff and Finis Larrison, and sister, Blandine Zachry. He is survived by his daughter, Jo Ann Larrison Wright, of Temple; son, Bill Larrison and wife, Lucy of Centerville; five grandchildren, Troy Davis of Womelsdorf, PA; Shannon Davis of Dallas; Joe Dan Larrison (Juli) of Huntsville; Jace Larrison (Vanessa) of Montgomery; Jill Larrison Harsh of Montgomery; eight great grandchildren; numerous nieces and nephews; and extended family members. Visitation will be held on Tuesday, July 6, 2021 at 9:00am and service at 10:00am, both at Sam Houston Memorial Funeral Home in Huntsville, TX. There will be a private family graveside service later that day. Memorial condolences to the family may be made at www.shmfh.com. In lieu of flowers, please make donations to First Baptist Church Huntsville - Home (fbchuntsville.org) or Huntsville High School Ex-Students Association, PO Box 8355, Huntsville, TX 77340 or to the charity of your choice.

Joe Wilson Larrison went to heaven on June 29, 2021, at the age of 96. He was born February 3, 1925, in Madisonville, Texas, to Evie Wilson Larrison and Finis Floyd Larrison. He graduated from Huntsville High School where he met the love of... View Obituary & Service Information

The family of Joe Larrison created this Life Tributes page to make it easy to share your memories.

Send flowers to the Larrison family.