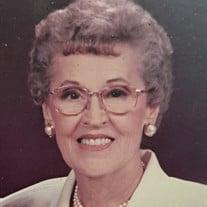 Jewel Durham Wilson, age 93, passed away in the early morning on June 8, 2021, in Conroe, Texas. Jewel was born on November 6, 1927, in Oilton, Oklahoma to Lawrence and Sara Durham. As the youngest of five children, she was adored by her older siblings (brothers Bernard, Bill, Lloyd and sister Esther) all of whom preceded her in death. In addition to the love and adoration provided to her by these immediate family members, she was also fortunate to experience the joy and happiness that accompanied two wonderful love stories. Within Jewel's first few years the Durham family moved to mountainous Moundsville, West Virginia where Lawrence and Sara would establish roots and raise their large family. Before Jewel had completed elementary school, she had already met her husband-to-be, Theodore "Ted" Wilson. As a child and teenager, often encouraged by her mother, Jewel recognized and developed her talent and passion for music. She participated in musical activities in church and school, learned to play the clarinet, and served as a majorette in the high school marching band. Upon completion of grade school, she and Ted married on August 9, 1945 and would transform a childhood friendship into a sixty-four year marriage. Jewel and Ted had one daughter, Susan, and in 1954 moved to Forth Worth, Texas where Ted could locate work and where Jewel was thrilled to be close again to her three brothers each of whom had already relocated to Fort Worth. While in Fort Worth, Jewel began a short career as a dental assistant. She would continue this work for almost ten years until the Wilson family relocated once more to League City, Texas. In League City, Jewel was fortunate to be able to spend many years doing exactly what she loved. She developed so many close friendships, served in the Methodist Church choir, took art lessons, wrote poetry, traveled with Ted on international trips, entertained guests in her home, and awed all with her two most impressive talents - gourmet cooking and organ playing. Jewel and Ted moved to Huntsville in 1995 to be close to their daughter and grandchildren. They resided together in Elkins Lake until Ted's death in 2009. In March of 2015, Jewel moved to the Carriage Inn in Huntsville, Texas where, after several years of widowed life, she was blessed to meet a second loving, caring, and devoted man. On September 29, 2015, Jewel married Frederick "Fred" Jones in Huntsville. She and Fred enjoyed almost six years of wedded bliss. They traveled in Fred's car to visit friends and family all across Texas, Louisiana, Ohio, West Virginia, and Rhode Island. They celebrated together their 90th birthdays and were great companions to one another during these years. Fred's dedication to Jewel and his willingness to help care for Jewel's well-being and health has been remarkable and a true testament to his love. Jewel is survived by her husband, Fred Jones, and daughter, Susan Thompson, and their respective families. Her grandchildren are Emily Binetti and Martin Schulze. Her great-grandchildren are Dutch Binetti, Avery Schulze, Julian Schulze, and Alyssa Schulze. Additional survivors include Charles and Vicki Thompson and children, Tony Binetti, Amanda Schulze, and Loren Cadenhead. Jewel is also survived by special long-time friends Frank and Anita Bryant. The Bryants have served as Jewel's most trusted friends for over a half of a century and held a special place in Jewel's heart. Her life will be celebrated in a funeral service in the chapel of Sam Houston Memorial Funeral Home in Huntsville, on Saturday, June 12 at 11:00 A.M. with Chaplain Wayne Norman presiding. Visitation with the family will be at the funeral home on Friday, June 11, from 5:00 to 8:00 P.M. Interment will follow at the Shannon Rose Hill Memorial Park in Fort Worth on Monday, June 14, at 2:00 P.M. Martin Schulze, Charles Thompson, Frank Bryant, and Loren Cadenhead will serve as pallbearers. In lieu of flowers, those desiring to memorialize Jewel's life are encouraged to make donations to their preferred charities or churches.

Jewel Durham Wilson, age 93, passed away in the early morning on June 8, 2021, in Conroe, Texas. Jewel was born on November 6, 1927, in Oilton, Oklahoma to Lawrence and Sara Durham. As the youngest of five children, she was adored by her older... View Obituary & Service Information

The family of Jewel Durham Wilson created this Life Tributes page to make it easy to share your memories.

Jewel Durham Wilson, age 93, passed away in the early morning...

Send flowers to the Wilson family.