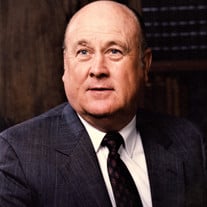 Jerry Lynn Woods went to be with the Lord on Friday, July 2, 2021 at the age of 84, at home with his wife present. He was born June 14, 1937 in Walker County, Texas to Cleo Bishop Woods and J.B. Woods. He graduated from Huntsville High School in 1956. He attended Sam Houston State Teacher's College where he met the love of his life, Judith Ann O'Dell. They were married while in college and had 63 years together of wedded bliss. After graduating from Sam Houston with a degree in Agriculture and a teacher's certificate, he continued working on his Master's degree, which he received in 1968. His first teaching job was in New Braunfels, Texas, which was cut short as his National Guard unit was activated during the Cuban Missile Crisis. After being discharged from military service, he returned to teaching in New Braunfels. He later taught and coached at Royal I.S.D. and Caldwell, Texas. He then moved to Huntsville and taught for 26 years until his retirement. Jerry was preceded in death by his parents. He is survived by his wife Judy, his sister Beth Gallagher, and three children: daughters, Dawn Woods Waidelich (Bill), Wende Woods Downe (Jimmy) and son Jon C. Woods (Deanna). He is also survived by eleven grandchildren: Julie Downe Gholami (Javad), Claire Downe Mata (Alex), Samuel Downe (Corinne), Cody Waidelich, Laura Downe, Anne Waidelich Stephenson (Philip), Sara Waidelich and fiancé David Hoagey, Diane Woods Morris, Jon-David Woods (Bella), Gabriel Woods and Rebekah Woods. Three step grandchildren: Victoria Taylor, Nick Sowders and Matthew Sowders. Great grandchildren: Viviane, Lilah and Jane Morris, Jameson and Lucia Downe, Micah Gholami, Daniel Mata, Samantha Stephenson, Finnetta Gholami (due in November) and Rosie and Thomas Taylor. He also leaves behind brothers-in-law Brook Crawford (Cindy) and Jim Oliver. Jerry was a devoted man of faith. He was an active member at Cook Springs Baptist Church where he grew up and found Christ. At each and every church he was a member of, he taught Bible classes and served in several capacities. He was an ordained deacon and member of the Gideons. He was a current member of Covenant Fellowship Church of Huntsville and served as a greeter. Jerry was a builder, raised paint horses and loved his farm where he raised cattle. He loved people and his coffee buddies at Barney's in the Crabbs Prairie community. He loved telling his story of playing football in Alaska with the Hornet football team. He loved teaching his students and his "black magic" was well known at Mance Park. His bus "26" was the popular ride from school to the loading dock each day. Jerry loved his wife, children and grandchildren and all the new babies coming in the family. Each time one was born, he would say, "This one is the most beautiful." Most of all he loved God and didn't mind sharing Jesus with anyone who would listen. Visitation will be held Friday evening July 9 at Sam Houston Memorial Funeral Home in Huntsville, TX from 5:00 - 7:00pm and services will be held at the McAdams Chapel at 11:00am, Saturday, July 10 with a graveside to follow. In lieu of flowers, donations may be made to St. Jude's Research Hospital, https://www.stjude.org and/or Covenant Fellowship Church Vision Fund, North, 606 FM 1791, Huntsville, TX 77340. Memorial condolences to the family may be made at www.shmfh.com.

Jerry Lynn Woods went to be with the Lord on Friday, July 2, 2021 at the age of 84, at home with his wife present. He was born June 14, 1937 in Walker County, Texas to Cleo Bishop Woods and J.B. Woods. He graduated from Huntsville High School... View Obituary & Service Information

The family of Jerry L. Woods created this Life Tributes page to make it easy to share your memories.

Jerry Lynn Woods went to be with the Lord on Friday, July 2,...

Send flowers to the Woods family.