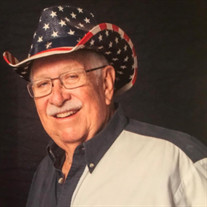 Jerry Carter King, aka “Mr. Wonderful”, passed on December 28, 2021 suddenly from a non-COVID related short illness. He is survived by his wife Kathleen aka “Precious”, of Montgomery, Texas, son Steven H. King and his wife Helen of Houston, Texas, son Trevor W. King and his wife Mary Beth of Cypress, Texas, and daughter Melissa C. Solomons (King) and her husband Paul of Dallas, Texas. He is also survived by his only sister Sabra Gent of Granbury, Texas, eight grandchildren and step-grandchildren, seven great grandchildren, devoted cousins, and many nieces and nephews throughout the great State of Texas. Jerry was born in 1940 on September 23rd, in Colorado City, Texas to B.F. “Shark” King and Dorothy C. King. Growing up in West Texas, graduating from Odessa High School, briefly attending Texas A & M University before finally completing his university studies at Texas Tech University, during such time as to meet the love of his life and future wife Kathleen. Through various locales in West Texas, Jerry began a long and storied career in the construction industry beginning in road and bridge construction with Cooper Construction of Odessa, Texas and Darbyshire Steel Fabricators of El Paso, Texas during the 1960’s before finding his true testament in the commercial glass industry. He began his career in the commercial glass industry in 1971 as a sales representative for PPG Architectural Metals. In 1978, he acquired Southwest Glass of Houston, Incorporated and was its president until he sold his interest to its current owner in 2006. In 1986, he was a founding partner in Houston fabrication shop Brake Shapes until its full acquisition by Glass Wholesalers, Incorporated, now a wholly owned portion of the OBE family. In 1995, he and an industry friend founded Window Systems of Texas, Incorporated, solely managed by his friend as its General Manager until passing in 2016. In 2016, Jerry came out of retirement to manage Window Systems of Texas, Incorporated until its stock sale acquisition by its current owner in 2018, whereas he retired again. An avid golfer for more than twenty-five years and holder of several DAL course records, he also owned several sailboats throughout the 1970’s and 1980’s becoming a nautical native to the waters of Lake Conroe, creating wonderful abodes to house his billiard table as a longtime resident of the Bentwater community in Montgomery, Texas. Services will be held on January 3rd, 2022 at the Sam Houston Memorial Funeral Home located at 20850 Eva Street, Montgomery, Texas with Visitation beginning at 9:00am and a Memorial Service beginning around 10:00am. Internment at Calvary Hill Cemetery located at 21723 Aldine Westfield Road, Humble, Texas 77338, on Tuesday, January 4th,2022 at 3pm. In lieu of gifts and flowers, please consider a donation to one of his favorite institutions at www.PBS.org. You may leave written memorials to his family at www.shmfh.com

The family of Jerry Carter King created this Life Tributes page to make it easy to share your memories.

Send flowers to the King family.