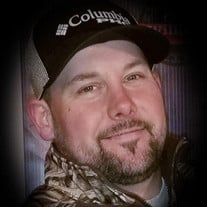 Jason D Turner, our loving son went to be with his Lord and Savior on May 31st 2021 at the age of 36, in Conroe Texas. Jason was born on May 21st 1985 in Houston Texas to Tammy Renee' Turner. He was raised by his parents Charles (Chuck) and Tammy Turner - Hooker in Spring Texas. Jason later moved to Huntsville, TX in 2010 to be closer to his parents. Jason attended Anderson Elementary, Dueitt Middle school and Spring High School. Jason was a little league baseball player at Northwest 45 for many years. Jason was a natural and better known to his teammates as " Burner Turner" for his fast ability to burn around the bases. His mom was his biggest fan, only missing one game out of hundreds over many years. Aside from baseball, Jason played football for Dueitt middle school. There wasn't a sport that Jason wasn't good at. At a very young age Jason had a passion for the outdoors. Hunting and fishing were Jason's favorite pastimes. He had a longing and desire to be in the woods or near the water every chance he could. Jason was a carpenter and craftsman by trade; learning at a very young age from his Pawpaw. He did new construction and remodeling. He was a gifted young man which he got natural. Jason comes from a long line of family Master Woodworkers. Jason was also an experienced a machinist where he worked at NOV and United Machines. In Jasons spare time, if he wasn't working or in the woods or near the water, he most likely had a steak on the grill. Jason loved cooking both indoors and outdoors. His favorite was cooking outdoors and typically consisted of his favorite music playing, as Jason was an avid music lover. Jason's biggest attribute to life was his "Golden Heart". Jason was the epitome of love and generosity. Those that knew Jason knew him for his kindness and ability to give you anything he could. No matter how big or small or who you were, he was always there to help and to give. Even after tragedy struck unexpectedly, taking this loving man from his family and with the assistance of his mother, Jason was still giving. He has given new and prolonged life to others by donating his organs. Jason leaves us a true " Hero". Jason is survived by his parents Charles and Tammy, daughter Maddilynn, sister Laci, half-sister Heather, his best buddy "Lil Willie", his dog Toby, grandmother Deborah Turner, Uncle Robert, Aunt Shannon, numerous great aunts and uncles, countless cousins and loving friends. Jason is proceeded in death by his grandfather Harry "Oscar" Turner, great grandparents William and Lois Garber, Tip and Bernice Turner. Jason truly was an incredible soul, loved by many. This is not goodbye. We will always carry his memory in our hearts, until we meet again. "To all of these, grant your peace. Let Perpetual light shine upon them; and help us to believe where we have not seen, that your presence may lead us through our years, and bring us at last with them into the joy of your home not made with hands, Eternal in the heavens; through Jesus Christ Our Lord. Amen" Services for Jason will be Saturday, June 19, 2021 at Sam Houston Memorial Funeral Home in Huntsville, TX at 2:00pm. A reception will be held later in the afternoon at J&L Events, 368 TX Hwy 75, Huntsville, Texas 77320 from 4:00 – 6:00pm. Memorial condolences to the family may be made at www.shmfh.com.

Jason D Turner, our loving son went to be with his Lord and Savior on May 31st 2021 at the age of 36, in Conroe Texas. Jason was born on May 21st 1985 in Houston Texas to Tammy Renee' Turner. He was raised by his parents Charles (Chuck) and... View Obituary & Service Information

The family of Jason Don Turner created this Life Tributes page to make it easy to share your memories.

Jason D Turner, our loving son went to be with his Lord and Savior...

Send flowers to the Turner family.