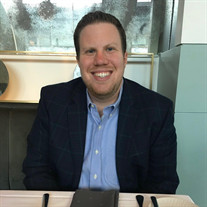 Jason Ezekiel Schenk, age 30, of Conroe, Texas went home to be with the Lord on Thursday, March 18th, 2021. Jason Schenk was born in Harrisburg, Pennsylvania to Timothy and Heather Schenk. He received his bachelor’s degree in elementary education from West Texas A&M in 2013 and his master’s degree in educational administration from Lamar University in 2018. He taught Kindergarten through Second grade for 8 years. On August 11th, 2013, Jason married Vera Elise Tunstall and they had two daughters, Annalise and Kendra, whom Jason dearly loved. Jason loved teaching. Being a positive influence and shining the light of Christ in his workplace was important to him. His infectious smile was well-known in his home, his friend-circles, and the various Bible Study groups he attended. Jason was a faithful member of Crossroads Baptist Church, serving with Elise in the preschool, and in the Toolman ministry for years. During the holiday season and during summer break, he could often be found helping out at Montgomery Bakehouse alongside his family and Elise. Jason had a childhood passion for showing horses and he loved to listen to all kinds of music, especially country. He also loved hunting and watching football! Jason was preceded in death by his maternal grandparents, John and Karen Bradshaw, and his paternal grandfather Ken Schenk. He is survived by his loving wife Elise, his daughters Annalise and Kendra, his parents Tim and Heather and siblings Ethan and Kaitlynn, grandmother Patricia Schenk, as well as in-laws, aunts, uncles, cousins and a nephew. A memorial service will be held on Tuesday, March 23rd at 6 o’clock pm at Crossroads Baptist Church located at 5000 College Park Dr The Woodlands, TX. Family Visitation will be prior from 5 to 6pm. You are invited to leave a written condolence on our website at www.shmfh.com.

Jason Ezekiel Schenk, age 30, of Conroe, Texas went home to be with the Lord on Thursday, March 18th, 2021. Jason Schenk was born in Harrisburg, Pennsylvania to Timothy and Heather Schenk. He received his bachelor&#8217;s degree in elementary... View Obituary & Service Information

The family of Jason Ezekiel Schenk created this Life Tributes page to make it easy to share your memories.

Send flowers to the Schenk family.